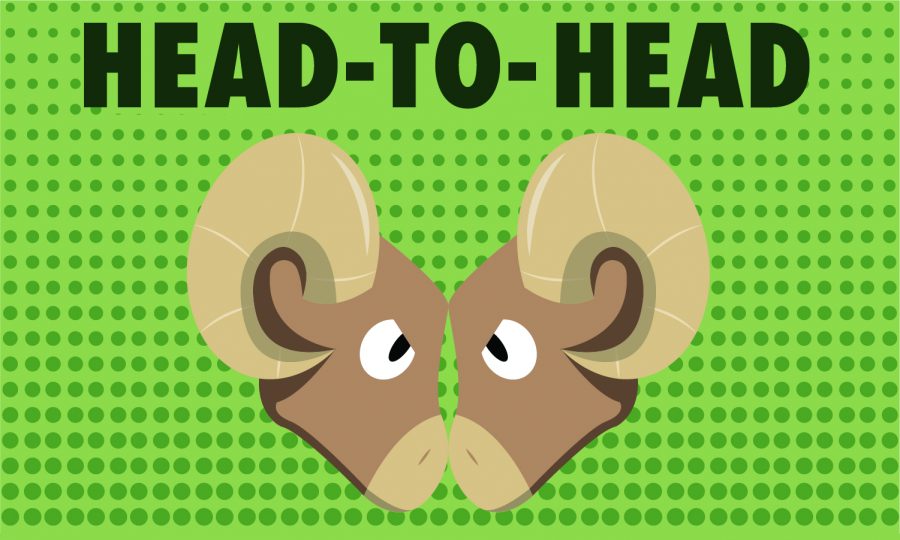 Head to Head: Campus preachers cause havoc outside of their message

Two columnists go head to head to debate how the Colorado State University community should go about handling the return of the campus preachers to the Lory Student Center Plaza. One author, Michael Stella, argues the student population should make their best attempt at ignoring the preachers while they yell because if there’s no clergy to preach to, there will ideally be less preaching. Writer Dylan Tusinski, however, argues the way the CSU student community has handled the preachers’ hateful rhetoric through jokes, costumes and dancing has shown just how strong the community is when it comes to standing up to hate speech. As a free speech issue, it can feel difficult to determine the best way to handle these preacher events. Read on, and let us know your stance on Twitter @CSUCollegian.

Keith Darrell and Shawn Holes have become recurring characters on the Colorado State University Lory Student Center Plaza. They show up at the start of every semester to preach their bigoted interpretations of the Bible, spouting homophobic, sexist and racist rhetoric at students on their way to class.

The preachers almost always draw a big crowd. People show up to earnestly ask questions, shout back at the preachers and — most importantly — make fun of their hateful rhetoric.

Spider-Man has made appearances; people in blow-up unicorn costumes have played out dance routines; breakdancers have come out and performed. CSU students have started taking the preachers less seriously, and the crowds have become less about the preachers’ bigotry and more about the antics surrounding them as a result, which is a very good thing.

By making fun of the preachers in such creative and unique ways, the CSU community has undermined any credibility the preachers may have had. Rather than playing into the preachers’ apparent savior complexes, CSU students have found a uniquely creative way to subvert their apparent bigotry.

I’ve written before about how comedy is often the best response to bigotry, and I stand by that. The university has repeatedly affirmed the preachers have the right to be on campus, which has drawn lots of scorn from the student populace. If CSU’s administration doesn’t care enough to act on the hatred students are experiencing on campus, it makes sense for students to take matters into their own hands.

“Not only does the lighthearted response undermine the preachers’ homophobia, racism and sexism, but it also builds a stronger community than almost anything else on campus.”

Not only does the lighthearted response undermine the preachers’ homophobia, racism and sexism, but it also builds a stronger community than almost anything else on campus.

Students come together to rally against hate more than they rally for sports teams, campus events or school spirit. Canvas Stadium often empties out by halftime, Moby Arena spends most of its time with empty seats and many other school-sponsored events have relatively low attendance. The preachers, on the other hand, keep people out there all day.

People skip class to hold up signs, make treks on and off campus to grab their pride flags and sit for hours in the hot sun to poke fun at the preachers. I can tell you firsthand I felt a stronger sense of community within the preachers’ crowds than I ever have at a CSU football game, frat party or other local event.

That sense of community simply doesn’t exist without the campus Spider-Men, the unicorns or the crowds surrounding them. That sense of community is also the strongest antidote to the bigotry the preachers are trying to instill in our student population. And truth be told, I’d much rather see a united crowd of smiling faces and funny signs than a rush of students refusing to stomp out hate on their campus.

Stella: Stop giving the campus preachers what they want — a crowd

The campus preachers have already been out on The Plaza within the first two weeks of school, spewing their nonsensical and hate-filled rhetoric as they have the last few academic years. That means the massive crowds of students surrounding the so-called preachers have also returned, which is exactly the problem.

The campus preachers — a loose and dishonest nickname given to people who think they are accurately depicting the word of God when they are doing quite the opposite — can only survive on campus with the attention of students.

Colorado State University is a public institution. This university is built upon land that was given to us by the federal government after it was improperly seized from the Native Americans who lived here. The point is that as a public university, we cannot deny people access to the campus. It would go against the First Amendment.

Free speech on the CSU campus is a proud tradition, and it is something students should be proud of. The Stump in the Lory Student Center Plaza is a shining example of free speech, although it would be nice if it was utilized more often.

As Americans in general, we seem to have forgotten how to have productive and meaningful debates about social and political issues. Far too often, the younger generations of Americans especially fall for the trap of trying to rationalize with irrational people.

The folks who come to campus to spew homophobic rhetoric are not individuals who can be reasoned with. Period. And no attempts at discourse — civil or otherwise — should be attempted.

“In the same way a fire needs fuel to grow, if we do not provide the fuel to the preachers, their agenda will die out — as it should.”

Instead, these hateful individuals who are trying to spread an ideology inconsistent with their own religion need to be ignored. Do not give in and give them the attention they so desperately crave.

It can be hard to walk by someone who is degrading and outright hateful to minority groups of the CSU population. As Americans and humans in general, we must always be there for those who are targets of discrimination and hate from those of advantaged places.

When massive groups of students form to heckle the campus preachers — a treatment they certainly deserve — the preachers win. They gain the advantage.

What if they were ignored by every single student who walked by? What if they came to CSU for weeks on end and no one paid an ounce of attention to them?

If this was the reception they received every time they stepped foot on this campus, most students would have no idea who they are. They would have no audience and no platform to disseminate their hateful speech.

In the same way a fire needs fuel to grow, if we do not provide the fuel to the preachers, their agenda will die out — as it should.

There is no place for the wannabe preachers and their backward, discriminatory speech, but as long as CSU stays a public school, the student population needs to find an effective alternative to crowding the preachers.

It is the same human behavior that occurs when you see a car crash on the side of the road and want to slow down and see what happened: When there is a mass of students gathered on the LSC Plaza, more are certain to join.

As more and more curious students pass, the compounding effect goes into full force, and the preachers have exactly what they crave: a clergy to preach to.