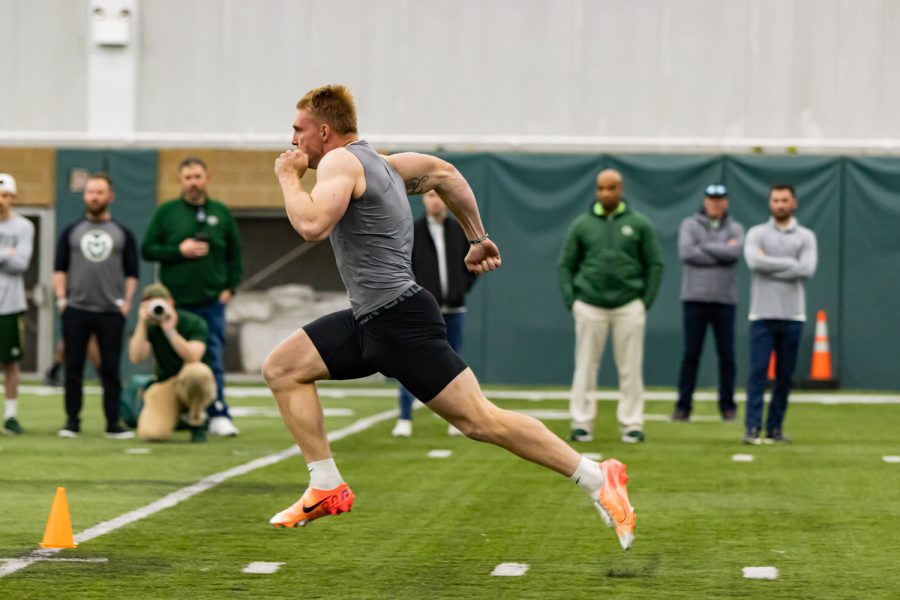 Colorado State tight end Trey McBride runs a 40-yard dash during CSU pro day March 30. McBride is highly expected to be drafted into the NFL and ran a recorded 4.56-second 40.

Head to Head: CSU pro day — which Ram could go all the way?

If you had one last shot to live your dream, what do you think you would do with it? Last Wednesday, 12 Rams answered that very question as NFL scouts and media members descended upon the campus of Colorado State University for CSU’s 2022 NFL pro day.

However, with the limited roster spots and abundance of draft picks teams have to work with, a majority of these Rams probably won’t hear their name called during the draft. That being said, there were several Rams who seized the opportunity to make quite an impression.

Here, I will give you my take on who could be dark-horse candidates and land a spot on an NFL roster and who improved their draft stock after their performances on Wednesday.

While Trey McBride garnered the most attention out of the offensive prospects — and deservedly so — I thought wide receiver Jordan Kress made a better case for himself than many were expecting.

The graduate transfer from the University of New Mexico showcased his physical prowess with his impressive vertical ability and blistering speed in the high jump and 40-yard dash drills. He also proved himself to be a capable route-runner, although there were question marks around the Loveland local’s hands, as he had a few big drops on deep routes. Nonetheless, Kress may appear on a practice squad roster post-draft.

For the defensive side, I was extremely impressed with defensive lineman Manny Jones. The 290-pound Georgian showcased he has the potential to be a formidable pass rusher, looking strong on the pads. As if being big wasn’t enough, I clocked him with an unofficial 4.7 40-yard dash time. I’m sure there are a few teams that would love to have that amount of size and speed on their roster.

As for whose draft stock rose the most, I would say punter Ryan Stonehouse takes the cake. Stonehouse was locked in, booming punts upward of 55 yards into the wind with his longest punt of the day being 70 yards. Some might not expect to hear Stonehouse’s name come draft night, but don’t be surprised if a team uses a late-round pick to secure the punter.

Going into pro day, McBride had little left to prove to scouts in attendance. Having already been to the NFL Scouting Combine, McBride showcased his physical ability as well as his hands. One of the things he didn’t do at the Combine was run the 40-yard dash.

McBride said this was intentional, as he wanted to get as many eyes as possible in Fort Collins for his teammates. McBride gave all the scouts what they came for as he shattered expectations with a 4.53 second 40-yard dash time (although clocked times ranged from 4.52-4.59, and an average 4.56 was recorded), which cemented him as a top tight end prospect in the draft.

With the 2021 Colorado State University football season coming to an end a few months ago, 12 graduating Rams hit the field last Wednesday to show off their physical capabilities in the hope of catching the eyes of NFL scouts at the 2022 CSU pro day. Here’s my take on who excelled in their attempt to earn a spot on NFL rosters.

While Trey McBride took most of the attention from the media, he wasn’t the only tight end making their case for NFL scouts. Cam Butler, who missed the last five games of the 2019 campaign and the entirety of the 2020 season due to a foot injury, has made quite a name for himself without letting his past stop him in his tracks.

Butler was named to the John Mackey Award watch list in both 2018 and 2019 and played 10 out of 12 games last season, snagging 10 receptions for 164 yards and three touchdowns. At pro day, he looked comfortable and remarkably strong. He did not drop a pass all day and showed off quickness and change of direction more similar to a wide receiver than a tight end. Although the focus at the tight end position was on McBride, Butler proved he could end up as a free agent pickup following draft night.

On the defensive side of the ball, I loved what I saw from defensive back Logan Stewart. Stewart was incredibly fast for his 40-yard dash. I hand clocked him at 4.32 seconds, which means he probably ran closer to the 4.4-4.5 second range, which is still a very impressive time. He played 10 of 12 games in the 2021 season, tallying 28 total tackles and one interception. He looked comfortable and determined as ever, proving to scouts he is a worker on the field. After this workout, he could be what some teams could want in a project player at the safety position.

Keeping with the theme of draft stock rising for special team players, my pick would have to be long snapper Ross Reiter. The connection he and Ryan Stonehouse had during their time at CSU was effortless, and it allowed both players to shine during games and stand out during pro day.

Reiter was perfect in all his snaps, whether they were to Stonehouse on a punt or for a kicking hold. Stonehouse didn’t have to move his hands but ever so slightly due to Reiter’s snapping accuracy. He also showed strong blocking ability and is more than capable of going to a team in need after draft night. His accuracy, in my opinion, could possibly get him taken late in the draft along with Stonehouse if scouts paid the attention these guys were due.

On the topic of Rams football, the 2022 team will be hosting a green vs. gold spring game April 23 at 1 p.m. for all Ram fans to attend and for new head coach Jay Norvell to present a fresh look at what could be a building year for CSU. The Rams will also have their first game of the 2022 season on Sep. 3, facing off at the University of Michigan.