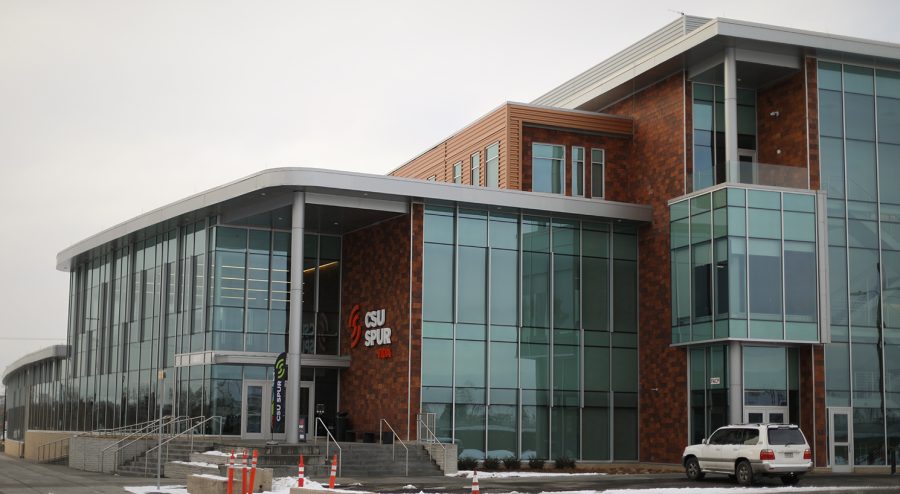 The Vida building at the Colorado State University Spur campus is open to the public six days a week, Feb. 23, 2022. The Spur campus will have three buildings total, each dedicated to a different field of study.

Expanding the CSU brand: How Spur came to Denver

It started with a need, and now, it looks to fulfill its mission by meeting the needs of its community: the state of Colorado.

This is how CSU Spur came to be.

Tony Frank, the current CSU System chancellor and former president of CSU’s Fort Collins campus, said the first conversations about bringing a physical CSU campus to Denver started around 2008 as the National Western Stock Show looked to move away from its historic location between the Globeville and Elyria-Swansea neighborhoods of Denver and closer to the Denver International Airport.

The proposal would have included building a space for the Stock Show next to the Gaylord Rockies Resort & Convention Center, which opened in 2018, and had the potential to hurt downtown Denver’s economy, according to The Denver Post.

“(For) years, as long as I can remember, we’ve been trying to find a way to highlight the CSU brand in Denver,” Frank said. “In the state capital, major metropolitan area, all these things, and yet it didn’t seem to us like building another bricks and mortar campus with lecture halls and dorms; that didn’t seem like the right thing to do.”

“The idea to redevelop the area and make it a year-round hub for all these activities and education — … that’s really how the conversations began with CSU.” -Tiana Kennedy, CSU System assistant vice chancellor of external relations

Frank said there did not seem to be a need for another traditional university in the Denver area — after all, the Denver metropolitan area is home to multiple universities and community colleges, both public and private. The System passed on the first opportunity of a location partnership with the National Western Stock Show, Frank said, but the possibility came up again a few years later.

Both Frank and Tiana Kennedy, the CSU System’s assistant vice chancellor of external relations, said Denver Mayor Michael B. Hancock convened a blue-ribbon panel to evaluate the possibilities of keeping the stock show in Denver. In 2011, the stock show brought five business proposal options to Denver officials, according to an article in The Denver Post.

“The idea to redevelop the area and make it a year-round hub for all these activities and education — … that’s really how the conversations began with CSU,” Kennedy said.

At the same time, Frank said CSU needed a way to up their enrollment and inform more people about their new program, called the Commitment to Colorado, a scholarship opportunity for Colorado residents to attend CSU with fully paid tuition and fees.

Frank explained CSU realized no one really knew about the program, and they needed to adjust their messaging about it. Additionally, Frank referenced studies showing “of first-generation kids who didn’t go to college, their parents generally made the decision somewhere around late junior high that college was unaffordable.”

With so much discussion around high student loan debt and the rising cost of higher education, Frank said many people hear those conversations and believe there is not an affordable path to college. CSU wanted to disrupt that cycle.

“All those things came together for us to say, … ‘What if our goal was to get people really excited about education and understand — and get the message back home to their parents — that there is a pathway to college?’” Frank said. “(That) despite what you’re hearing about the cost and about debt, there is a way to get there.”

The CSU Spur campus funding came from city and state expenditures already in place at the time of the Master Plan proposal.

Part of the funding came from Measure 2C on Denver’s November 2015 ballot, which asked to extend indefinitely a 1.75% lodger’s tax on hotel rooms and rental cars in the area and was originally approved in 1999, according to Ballotpedia. The measure specifically stated the extension would allow for the National Western Center project and provide “locations for new Colorado State University agriculture-related academic buildings on the National Western Center.” According to an editorial in The Denver Post, the lodger’s tax funded $476 million of the first two phases of the NWC project.

The other part of the funding came from a certificate of participation granted by the Colorado General Assembly through House Bill 15-1344, approved by former Gov. John Hickenlooper in May 2015. Henry Sobanet, chief financial officer for the CSU System, said the funds granted by the COP were previously being used to pay off a prison built by the state, and as that came to an end, the legislature authorized another issuance of the bond. This means the legislature created a new round of debt from the state’s general fund, so financing the campus did not add to state spending.

“Your presence there shouldn’t just add value to you; it should really add value to the people who live around you and your new neighbors.” -Tony Frank, CSU System chancellor

The COP will provide up to $250 million — $200 million for Spur facilities and $50 million for the Fort Collins campus, Sobanet said — across 20 years, according to the bill.

Funds are appropriated annually by the CGA, which allows the CSU Board of Governors to “expend money from the trust fund to make lease payments payable under the terms of lease-purchase agreements” authorized in the bill.

While looking to build a campus for “all of Colorado,” as Frank said at the Vida building ribbon-cutting ceremony Jan. 7, CSU realized they had more work to do in the immediate community around the National Western Center.

The Globeville and Elyria-Swansea neighborhoods are some of Denver’s oldest and most neglected areas. The intersection of Interstate 25 and Interstate 70 splits Globeville into four sections. The road construction and history of smelting in the area has poisoned the air and soil with lead in Elyria-Swansea and Globeville.

With million-dollar development proposals and neighborhood revitalization efforts across Denver, gentrification worries residents, and the National Western Center has only added to those concerns.

Kennedy said CSU recognizes this and is working with the community to ensure the Spur campus does not cause more harm than good. CSU tries to hire locally and reach out to organizations in the community so they can be effective partners and not replicate services, and they compensate people for their time when asking for advice and feedback.

To be a good partner, Frank said CSU aims to be an “anchor institution” in the area, a term that says big institutions should not just go into a community to benefit themselves but should work to really be a part of the community, buying local products and hiring local residents, Frank said.

“Your presence there shouldn’t just add value to you; it should really add value to the people who live around you and your new neighbors,” Frank said.

Jocelyn Hittle, assistant vice chancellor for the CSU Spur campus and special projects, said part of being a good partner is being responsive to the community’s wishes.

To do this, CSU created the Spur Scholarship specifically for high school students from the 80216 zip code, which encompasses Globeville and Elyria-Swansea. The scholarship funds students who have lived in the area for at least two years and are in good academic standing up to $10,000 upon admittance to a CSU institution.