NBA Heat Check: The great ‘what if’ with Kevin Durant 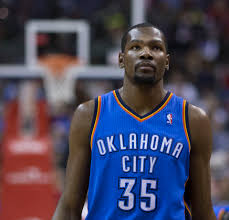 The great what if: What if the rumors are true and Kevin Durant is going to sign with the Warriors?

Okay, first of all, that would be so terrifying. What team could possibly hope to win against this starting lineup?

On defense, they could switch everything. I mean four guys that are all long, athletic shooters? With Steph Curry? Imagine a Curry/KD pick and roll! Who is stopping that? Nobody. That’s who. This team, if healthy, could honestly win 77 games. The fit is perfect. But, could it actually happen?

Kevin Durant himself hasn’t really said anything of importance on his upcoming free agency, simply giving the bland answer he will just continue to work hard everyday. Although it doesn’t shed any light on whether he is interested in joining the Dubs, it doesn’t rule anything out either. It also doesn’t sound like he is as committed to the Thunder as he used to be, as he gave about as noncommittal an answer as a player could. So, the viability of this from the viewpoint of whether KD will do it is unclear.

Another piece to this is whether the Warriors can even afford to sign him this upcoming offseason, and what they would have to give up to get him. At the very least, it appears that resigning Harrison Barnes, while also getting KD, seems to be off the table.

So, that death lineup above might end up including Andre Iguodala or maybe even Kevin Looney at some point. Looney would fit right in with the Warriors, should he live up to his potential as the lanky, athletic shooter that the Warriors seem to have an endless supply of. But, in terms of actually having the capability to sign Durant, it looks as though, with the huge cap bump from the NBA television deal, the Warriors have the necessary means to acquire KD.

If it means losing Barnes, well, I’d take Durant over Barnes in a heartbeat.

The likelihood of Durant resigning with the Thunder is still on the table, however. I mean, he would be playing with Westbrook, who in my mind is a top-5 player and has a good chemistry with Durant. The Thunder also offer Serge Ibaka, a perfect big to compliment Durant with his floor spacing and rim protection. But, the way the league is going with this pace-and-space, I think Curry is more valuable than Westbrook, simply based on the fact he is the best shooter ever, and Green is better than Ibaka in the fact he can switch onto guards and his outstanding playmaking ability.

The Warriors also seem to have better depth than the Thunder, with two-way players (good offense and defense), while the Thunder invested in one dimensional players such as Andre Roberson (all defense), Enes Kanter (all offense) and Dion Waiters (all terribleness).

To me, the choice is simple; go join one of the best teams in NBA history. But, Durant seems like a loyal guy, and there are is always the chance he might return home to D.C. with the Wizards. If KD wants to finally win that elusive championship, the choice is simple. Until next time.