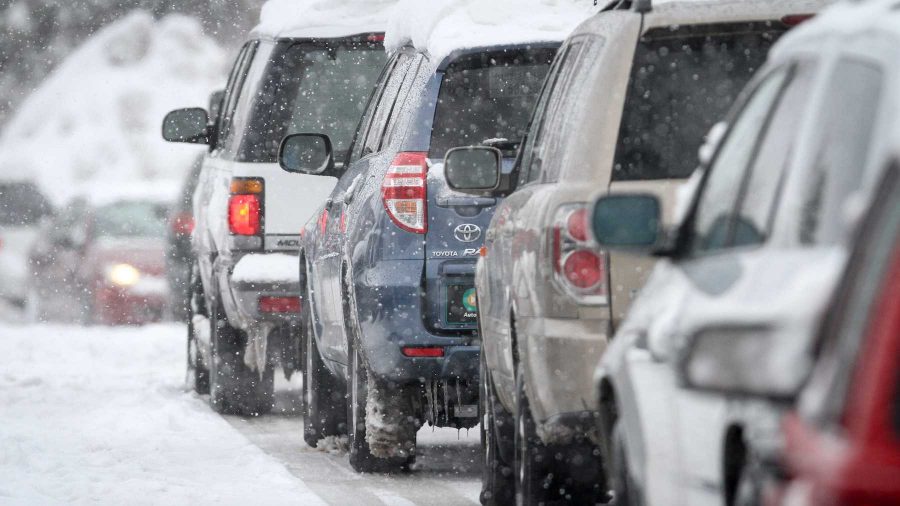 Cars at a stand-still in the Morgan Library parking lot after campus closed at noon on Wednesday. (Photo by Hunter Thompson)

While there were no more injuries or accidents than were expected on an extremely snowy day, the noon closure posed a serious threat for the the outgoing students and faculty. The slush riddled roads in combination with falling snow and the massive concentration of traffic was one slippery slide away from utter chaos.

The decision by the administration to close down campus should have been made much earlier in the day. Making the decision to close the campus at noon endangered both incoming students and faculty not once, but twice. Once as they drove to campus through less than stelar conditions, and again as they drove away from campus in the same conditions.

While we do appreciate the opportunity to have an afternoon off, the warning text from administration that the university would soon be closing came far to quickly to afford us an opportunity to leave in a way that was safe. A 15 minute warning is just not enough time for all of us to leave in an orderly manner.

What we need is an explanation from administration and President Tony Frank for why they made the decision that they did yesterday. Why was the decision not made earlier? What was the impetus for closing at noon, and only giving us a 15 minute window? What factors led to the determination that the university should be closed at that particular time?

Tony Frank has been nothing if not open with the student body with regards to delays and snow in the past, and we hope that we will soon receive a long e-mail from President Frank soon. When our safety is involved, we have a right to know.