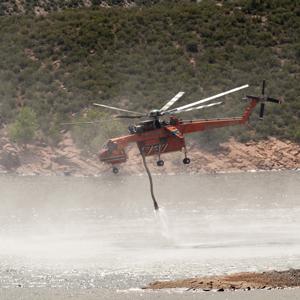 The images coming from the destructive Waldo Canyon Fire in Colorado Springs continue to be amazing.

This video, originally from the Associated Press and posted on The Washington Post’s site, highlights the efforts of firefighters to stop the blaze from claiming more than the 346 homes that were ultimately destroyed.

We’ve been reporting on the High Park Fire at the Collegian for more than three weeks now, and a recurring topic with firefighters is the inconsistency of large wildfires and their refusal to burn uniformly. This video shows just that when embers from one burning home light another home two doors down on fire, but skip the home in between the two.

I think that it’s often difficult for us to wrap our heads around the fickleness of major disasters, to accept that we don’t even know what to expect in the event of a tragedy such as this, much less control the outcome.

As Colorado begins to clear the fallen ash of the  last month it’s becoming clear that these fires have done more than just change the physical landscape of the places we call home. I’ve witnessed more community cohesion throughout these fires than I’ve ever seen in my life. Animals and people alike have been taken in by complete strangers, businesses have opened their doors, free of charge, to victims and the support for firefighters has been tremendous.

The rebuilding process is only just beginning, and these fires have and continue to be tragedies, but they’ve also made me proud to say that I live in Colorado.