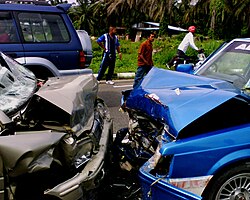 According to 7News, a man driving a truck was pursued by police yesterday at speeds up to 114 mph for an entire 70 miles. The chase started at 12:54 pm and ended an hour later when the truck crashed into a car that was parked on the side of Interstate 70, then hit a moving car with two people in it, causing their vehicle to flip.  Both people were taken to the hospital with minor injuries.

In many other cases, innocent bystanders are not as fortunate.  An average 360 people are killed each year in traffic pursuits, and USA TODAY reports that one-third of deaths are those people who are simply in the wrong place at the wrong time.

Man dies in crash during high-speed chase after firing at deputies(denverpost.com)

Chase reached speeds up to 100-mph(wdtn.com)

Couple having sex in truck lead police on chase(kfor.com)