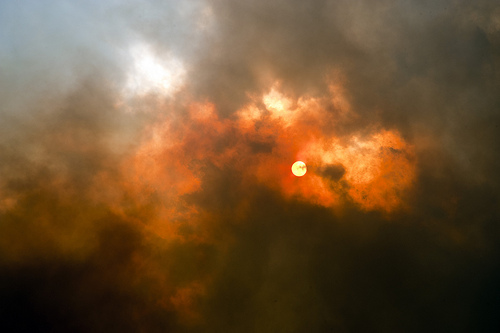 Bloomberg Businessweek is reporting that the cost of fighting the destructive Waldo Canyon Fire is now up to $3.2 million and the price of the High Park Fire is now at $33.5 million, according to a press release sent by the Larimer County Sheriff this morning.

No one is going to argue for penny pinching when homes and lives are threatened by wildfires, but the cost of containing a blaze the size of the High Park Fire is staggering. So how do states cover the cost?

Tim Hoover wrote for The Morning Journal that the current fires come at a tricky time for Colorado politicians. The state’s fiscal year ends in June, so the budget is less flexible at the moment than it would be if the fires had sprung up a month from now. Nonetheless, the governor’s office has managed to move enough funds around – for the moment – to cover the cost of the fires.

“… (Hickenlooper) transferred $15 million from a reserve fund of more than $100 million that is funded by surcharges on worker’s compensation insurance. An additional $24 million came from other places in the budget where funds had been unspent in the current fiscal year (Hoover, The Morning Journal).”

Hoover also reported that as much as 75 percent of the cost will be reimbursed by the federal government. This means that, while we will be paying more than residents of other states,  Coloradand aren’t the only taxpayers involved in funding the firefighting efforts.