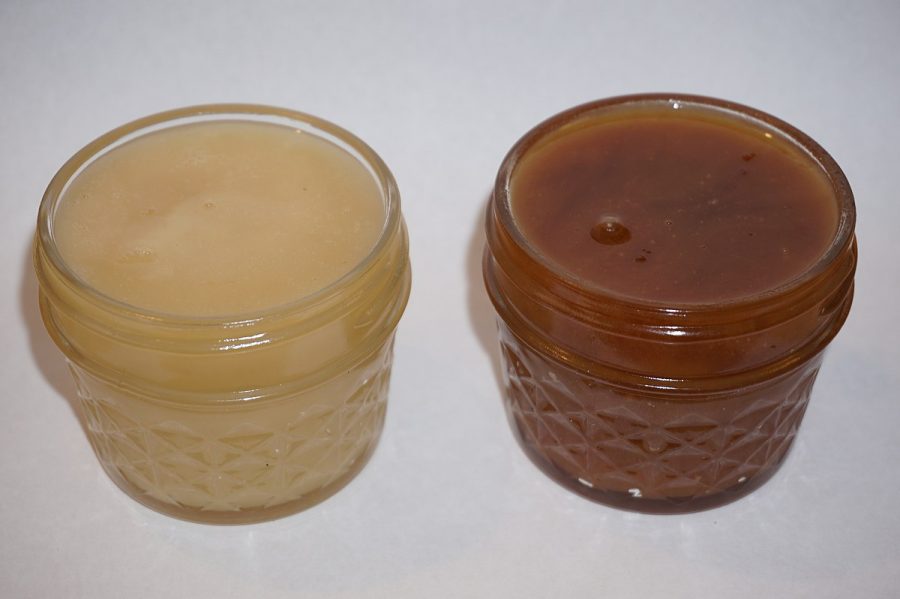 How your honey should look after finishing, and how it will look after it has set

Honey is one of the many thing bees are great for, so make sure you save the bees! Bee-cause without them, we would not be able to make medicated honey! Medicated honey is another great infusion method for various edibles down the line, like tea for instance. It is simple, and will last longer than most other base edibles, because honey does not go bad!

The first step in making your medicated honey is marijuana. As with all medicated treats we make, you can use anything from trim, to shake, to good quality whole buds. The better the weed, the better your honey will be.

The next step is debatable to some, but many would argue that you should then decarboxylate your cannabis.  Decarboxylation is the process of turning THCA into THC (along with other cannabinoids in their respective forms), because THCA is none-psychoactive until activated into the form of THC.

To decarboxylate your weed, first grind it finely. Then place it evenly on a parchment lined baking sheet. Finally, place it in a 220-degree Fahrenheit oven for at least 30-45 minutes. This time might not activate all the THC, so it is often recommended to decarb for about two hours.

After decarbing your cannabis, it is time to make your cannaoil. As normal, make this as strong as you like, and keep in mind we will be using about half a cup of cannaoil per 16 ounces of honey.

Now that we have made our cannaoil, it is time for the moment we have all been waiting for. Making the canna-honey. I told you all this is a simple recipe, and perhaps the simplest of all our recipes. I will not even write it like a formal recipe it is so easy.

Take your 16 ounces of honey and place it in a blender. Then, put a half cup of your cannaoil. Finally, blend it until mixed and the color of the honey is light and more of a cream color. That is it. You are now done making canna-honey. I told you this was the easiest recipe yet.

Now that you have your weed honey, you can put it anywhere you would normally put honey, You can put it in your tea, on a peanut butter and honey sandwich, in bread, or even make granola.