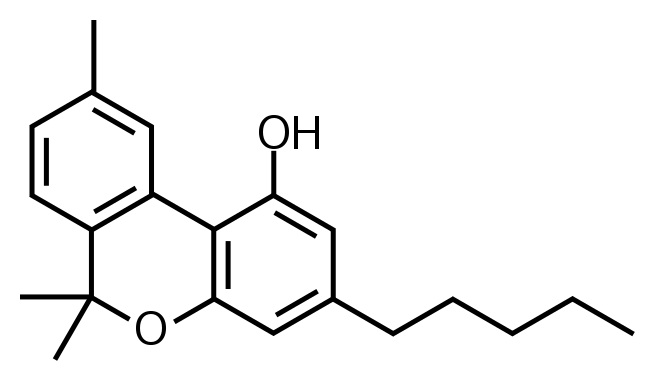 The molecular makeup of CBN

CBN, or cannabinol, is another great lesser cannabinoid in our cannabinoid series that has covered CBD, CBG, and CBC. Like many other cannabinoids, excluding THC, CBN is non-psychoactive and will not produce a high.

CBN tends to get a bad rep, because unlike most cannabinoids, CBGA doesn’t create CBN. Instead, THC degrades into CBN, so CBN is seen in older cannabis that has not been properly stored. Even dried flower has less than one percent CBN when properly stored and dried. This is unfortunate, because CBN is great at treating several things, and does so better than other cannabinoids in the areas it specializes in.

The biggest discovery that was found by Steep Hill Labs was that five milligrams of CBN is equivalent to 10 milligrams of diazepam, or more commonly known as valium, when it comes to body relaxation.  Valium is a benzodiazepine that is used to treat anxiety and muscle spasms among other things. CBN can therefore help treat for these things, and it does not have the side effects that valium can have, or the addicting traits.

CBN is also known for making people tired. It is theorized, that CBN is the cannabinoid mainly responsible for the sedative effect of marijuana, but it does so best when paired with other cannabinoids. This means that CBN is fantastic for those who suffer from insomnia.

Another huge benefit of CBN is its ability to stimulate the appetite. In a study done with rats, CBN was found to significantly increase the speed, duration, and overall consumption of food in a given hour. This property makes it a great cannabinoid for cancer patients going through chemo.

CBN is also known for its anti-convulsant properties, its ability to fight pain like arthritis and Crohn’s disease, and help treat glaucoma. However, other cannabinoids like CBD and THC are found to do a better job with these.

You can find CBN in higher concentrates in certain topicals and lotions. Mary’s Medicinals also has CNB capsules, transdermal pens, and transdermal patches for a more concentrated cannabinoid specific application.

Although CBN is one of the least concentrated and underappreciated cannabinoids, it is one of the most helpful if you suffer from insomnia or lack of appetite.