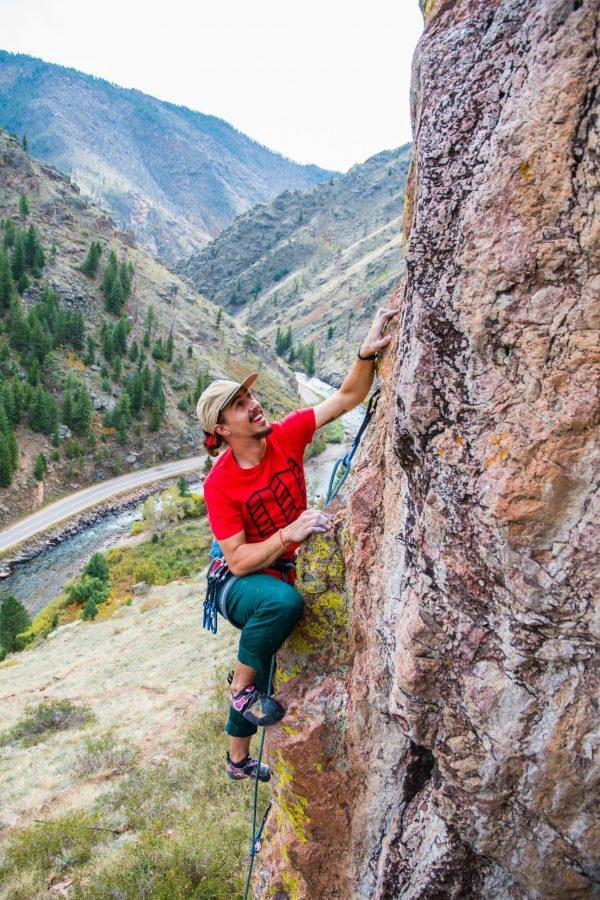 Brennan Dyehouse, a member of the CSU Outdoor Club, is stoked as he successfully leads an 11a for the first time outdoors. (Michael Berg | Collegian)

With 53 mountains that rise more than 14,000 feet, those who crave to climb are drawn to Colorado and the Rocky Mountains. Climbing as a sport, and as a regular part of a fitness routine, has exploded in the last decade. Participation in rock climbing, including bouldering, sport climbing, indoor climbing, traditional climbing and mountaineering recently broke the 6-million participant mark, according to the non-profit organization The Outdoor Foundation. More than four million people participated in bouldering, sport climbing, and indoor climbing, and 1.8 million in trad climbing and mountaineering.

The dramatic uptick in climbing can be attributed to a few key factors. The proliferation of indoor climbing gyms, safer equipment, the competitive landscape and the ability through technology to find those remote climbing spots top the list.

Twenty years ago, there were only a handful of indoor climbing gyms and those gyms were located in mountainous areas of the U.S. Today, there are well over 400 indoor climbing facilities and the flatlander states of the midwest are leading this growth.

The sport of mountain climbing traditionally attracts those who not only appreciate the beauty of dramatic peaks and vistas but also those who are thrill seekers. The idea that one misstep could lead to a long, painful fall often dissuaded those who loved the outdoors from climbing. The onset of more durable, safer climbing equipment has opened up the sport to those who do not necessarily consider themselves adrenalin junkies.

“When climbing was first established as a sport, rock climbers used to tie ropes around their waist to reduce the risk of falling. Now there are numerous companies coming out with newer and safer equipment every year. You feel a lot safer with a harness and a secure anchor system than a rope tied around your waist,” Gilbert said.

Human beings are competitive by nature. So it is no surprise that the confluence of the number of people interested in climbing, accessibility to climbing venues through indoor gyms and the development of better safety equipment has led to an increase in competitive climbing teams and events. Currently, there are over 120 collegiate climbing teams in the US Collegiate series. CSU’s climbing team ranked second nationally in the 2016-17 school year and they have over 60 participants this year.

“The CSU climbing team was founded in 2012 as a place for climbers to train together and form a community. Four years later, we have four podium finishes under our belt, including two national championships,” said Gilbert.

More people are discovering the benefits of climbing. One session on a climbing wall at a gym like Ascent and you will quickly realize it is a full body workout.

“Climbing works everything from your shoulders, to your forearms, to your abdominal muscles. The movement in climbing causes rock climbers to have lean bodies, with particular emphasis on your upper-body,” said Gilbert.

You will also be challenged mentally as you think about how to get to the next handhold or how to use a foothold in the most effective way. Your comfort zones will be pushed, and you will end up with more mental toughness than you thought possible. You will gain a new perspective on the beauty and danger of the great outdoors when you make that first climb.

As with any new physical activity, you should start slow and increase your time on the mountain and difficulty of your climbs as your proficiency increases. Locally, Lory State Park, Poudre Canyon and Horsetooth Reservoir have climbs for all ability levels. The Northern Colorado Climbers Coalition and the CSU Climbing Team are great places to gather more information and start your new adventure.

Want to get your club’s news, events or games published on RamPage? Contact RamPage editor Michael Berg at mike.bergfoco@gmail.com