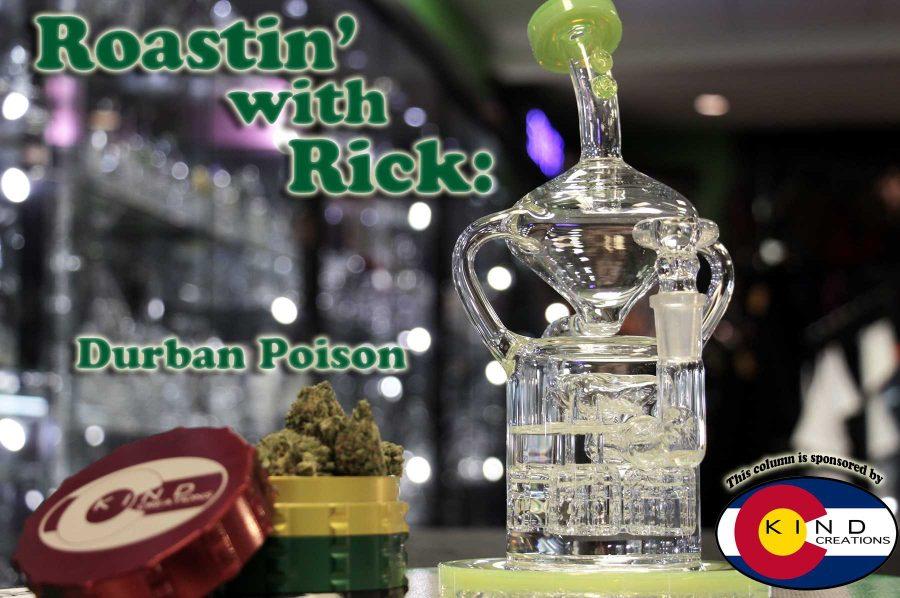 In this week's Roastin' with Rick, Rick looks into the famous sativa strain Durban Poison, and smokes it out of the collaboration quad-recycler from Kind Creations and Pukinbeagle. (Photo by Neall Denman)

For this week’s Roastin’ review, I wanted to look into a strain with a pure essence — no hybrids, just straight sativa or indica. I’ve also been reviewing some relatively abstract strains, so I wanted a common strain. I chose Durban Poison, the pure sativa strain — a more popular strain of marijuana — from Organic Alternatives.

Aesthetically, the flower from this strain is quite the bit of eye candy. Besides the enticing amount of THC crystals (keef) that cover this bud inside and out, there’s an abundant amount of incredibly bright orange and reddish hairs that protrude from every crevice. Although a majority of the vegetation holds a light green hue, there are several parts that are either very dark-green, or they’re almost purple. It’s a very pretty strain of cannabis nonetheless.

The smell. Oh my, the smell! I don’t think I have ever smelt a sweeter strain of marijuana. With a slight tinge of earthiness, the scent is overpowered by an incredibly strong scent of citrus (mainly lemon) with mint and pine. With those smells combined, it created this delicious fruity smell that I couldn’t get enough of. There isn’t a lot of skunkiness too it either, which was a refreshing characteristic to this strain. Overall, I’m a very big fan.

For the most part, the buds aren’t very dense and can be broken up by hand. But the immense amount of keef left my fingers sticky from the large amount of residue. Thus, I used the one and only, big and fat Phoenician Kind Grinder. Not only did that behemoth grind like a dream, but you could probably grind an entire  gram or two of bud in it at one time. Pretty cool, if you ask me.

To smoke the Durban Poison, I used Kind Creations’ and Pukinbeagles’ collaboration quad-recycler piece. Recyclers are always nice — when inhaling, water accumulates close to the mouth piece, which often leads to getting some nasty bong-water in the mouth, but with a recycler it’s almost impossible. And for the size of the percolators and chamber they’re in, the smoke was surprisingly smooth. I did get a couple coughs, but nothing too bad.

The flavor of the smoke was pretty surprising — it wasn’t as fruity or sweet as the smell, but the minty smell was pretty evident in the flavor. Along with that, there were a few hits which gave me a burst of pine. Now, I love the smell of pine, but I don’t know about the taste of it. It was interesting to say the least. With each hit, there was also a slight smokey undertone. With a THC content of 17.92 percent, I wasn’t expecting anything too harsh on the throat, and to no surprise it wasn’t harsh at all. Coughs here and there, but nothing debilitating.

The high was pretty great, a huge step up from my last review of Girl Scout Cookies. I was very active and pretty energized after smoking. Surprisingly, I was also focused — no matter what I put my mind to, I was getting it done and doing it in good time. Along with that, I was consistently (and pleasurably) overwhelmed with giddiness. It’s been a long time since I’ve laughed so hard and for so long at stupid things, and Durban Poison infected me with the giggles, which got that done with flare. Finally, there were no signs of anxiety or paranoia to report, and that’s always a plus.

Overall, I give Durban Poison a solid eight leaves out of 10. More than likely, I’ll be back to Organic Alternatives again to snag a couple grams of it soon.

Thanks for reading, and keep an eye out for my next review — I’ll be doing another concentrate, but this time I’ll be reviewing shatter hash instead of wax. Should be a good time.

To watch Roastin’ with Rick videos and to read about marijuana news local and national, check out the Collegian Green Report online at greenreport.collegian.com. Have a good break, and happy Thanksgiving, Rams!

Collegian Print Managing Editor Rick Cookson can be reached at entertainment@collegian.com or on Twitter @RickCookson1.