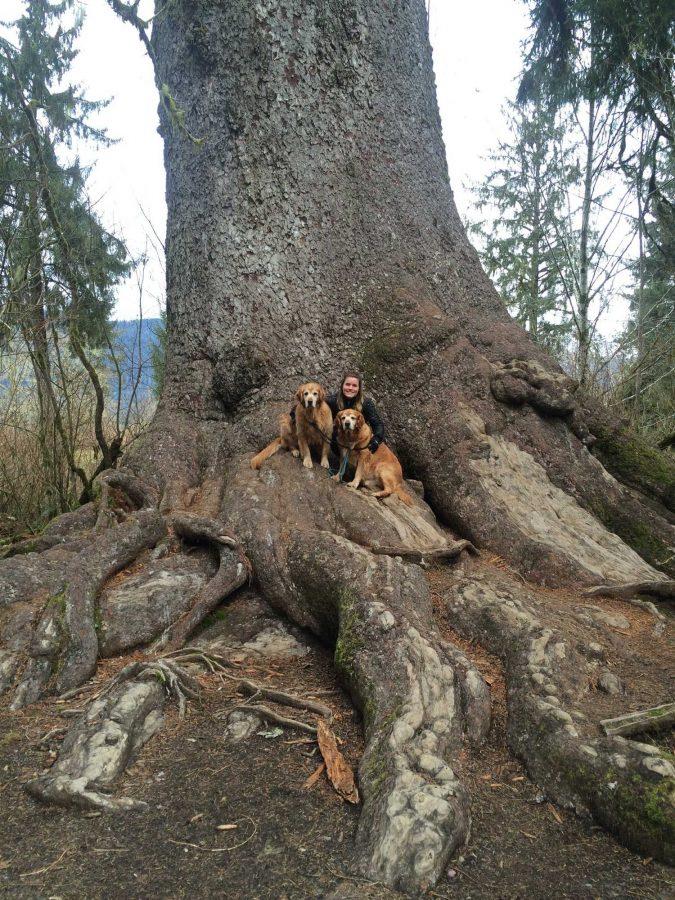 My dogs and I at the base of the Old Growth Sitka Spruce. Photo credit: Lindsay Wienkers

The more time I spend outdoors, the more I find that there are many things in nature that make me stop what I am doing and become consumed by the view. In some cases, it could be a mountain range in the distance after a big snow, or even the way the sunset is hitting the clouds – transforming them from curious white shapes in the sky to a messy paint palette with pinks and oranges intertwining. These moments I experience are part of the foundation of why I appreciate nature so much, and why I have dedicated my schooling at Colorado State University to help find solutions how to preserve nature’s wonders so generations to come can also treasure these moments.

The most recent experience I had was one of the most significant sightings in nature I have ever had.

During this past Winter Break, I went home to Seattle, Washington. For many, the gray skies and frequent rainstorms make going outside and taking in the cold, damp air unappealing. I find myself in the same situation sometimes. However, this type of climate seems to be the ideal condition for anything green. Everywhere I look, there is an organism of some sort thriving in the fertile, damp soil. This particular sighting I had, which was with a Picea sitchensis, also know as the Sitka Spruce, is not only a perfect example of how plants of all kinds can easily prosper in the Pacific Northwest, but also the reason behind my deep appreciation for Old Growth Trees.

Around Lake Quinault, Washington, which is near the Olympic National Park, there are trees as well as forests that have avoided any severe events from either nature or human, which are the qualifications to be considered an Old Growth Tree or Forest. This particular Sitka Spruce was the first Old Growth Tree I had ever seen, and I immediately felt, in the most positive way, inferior.

This tree is massive and ancient. It has a diameter of almost 59 feet and is over 1,000 years old. I would not consider the tree beautiful by the usual standards for plants. Its shape was more grueling – absolutely the perfect look for something that has been around for so many years. However, I find its size to be incredibly beautiful. The Sitka Spruce stands humbly among a variety of other, much smaller, trees, however, it stands out enough that both my mom and I knew that this was the tree we were looking for.

Although I do find it astonishing that an organism can be 191 feet tall, I believe that my appreciation is because of the age of the tree. Not only is it impressive that the Sitka Spruce has been able to avoid death or destruction, either by natural events or humans, it has also been experiencing life for a much, much longer time than the vast majority of other living specimens on Earth.

Over the past decade, I have noticed changes in the Olympic National Park, such as more logging as well an increase in visitors. I can hardly imagine what this park, which would have not even been considered a park at the time, looked like when the Sitka Spruce was just a small sapling, competing against other plants for resources in order to survive. However, I can easily assume that there would be no surrounding homes, hotels and roads. Rather, settlements would be scattered around the pesticide and oil free ground and fresh, clean air would be swirling in from the coast.

I understand that this tree would have not been able to see what was going on during this time of discovery. However, the fact that it was present during a time of, what I believe, to be a much purer time, is why I am so awestruck by these trees and forests. In fact, I even feel jealous that this Sitka Spruce got to experience a type of environment that I know that I, even through countless efforts I plan on partaking in, will ever get to.

Elton Trueblood once said, “A man has made at least a start on discovering the meaning of human life when he plants shade trees under which he knows full well he will never sit.” I will never know what nature would have been like to live in 1,000 years ago, no matter how much effort I put into conserving the environment. However, I hope that once I am done, there will be at least one step in the right direction for animals, humans and that Sitka Spruce, which inspires me frequently.

Collegian writer Lindsay Wienkers can be reached at blogs@collegian.com. Leave a comment!!