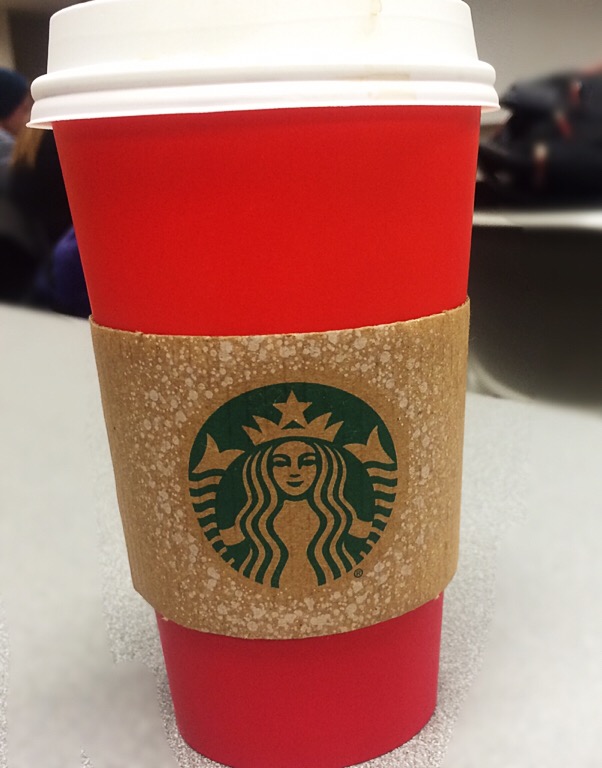 It is finally that time of the year again. Starbucks holiday drinks are back. When the weather gets colder and the seasons change, Starbucks comes out with its holiday drinks. Caramel Brûlée Latte, Chestnut Praline Latte, Christmas Cookie Latte, Eggnog Latte, Gingerbread Latte, Hone and Almond Hot Chocolate, Peppermint Mocha and Toffee Nut Latte are all included in their holiday lineup. Along with these drinks comes the red holiday cups, except this year, Starbucks added two changes.

Along with the holiday cups comes ridicule from customers. Last year customers complained. “To some, the naked red cup, unadorned with symbols like holly or snowflakes, is an affront against the Christian faith, a cut against Christianity,” said Vox.com. Individuals started getting angry with Starbucks because of what its old holiday cups looked like. Some thought because the cups were just plain red they were a dig against the Christian faith and did not look festive. Starbucks heard the complaints and took action instead of telling those people, “It is just a cup.”

The first change was that Starbucks released a set of green holiday cups. “In a statement, Schultz explained that the new design — which features a mosaic of more than a hundred people drawn in one continuous stroke — is a reminder of our “shared values and the need to be good to each other.” The cup, Schultz said, was created as a symbol of unity amid the divisive election,” said US magazine. After the green cups were released, customers were outraged because they thought they would be replacing the coveted red cups. They were wrong, though.

The second change made is that the red holiday cups now display designs created by customers. Instead of listening to the ridicule people gave them, “Starbucks is inviting our customers to tell their Christmas stories in their own way, with a red cup that mimics a blank canvas. Over the past few years, our customers have been showcasing their work on Instagram, Twitter and Pinterest, and we even held a contest to support this creativity. This year’s design is another way we are inviting our customers to create their own stories on our cups,” said Greatideas website.

Due to Starbucks inviting customers to design its coffee cups, they were able to receive back some very nice looking designs that ultimately make up the new holiday cups this year. The red holiday cups from Starbucks display the designs customers came up with last year, and I have seen lots of positive feedback on Facebook and other social media platforms because of it.

It is interesting to point out that places similar to Dunkin Donuts came out with their own holiday cup decorations and I have not heard a single ridicule revolving around their cups. There should not be any ridicule surrounding these cups because they are just cups. If you do not like how the cups looks, don’t buy it. If you do like how they look, buy it. It is as simple as that.

Collegian writer Tamra Smalewitz can be reached at blogs@collegian.com. Leave a comment!!