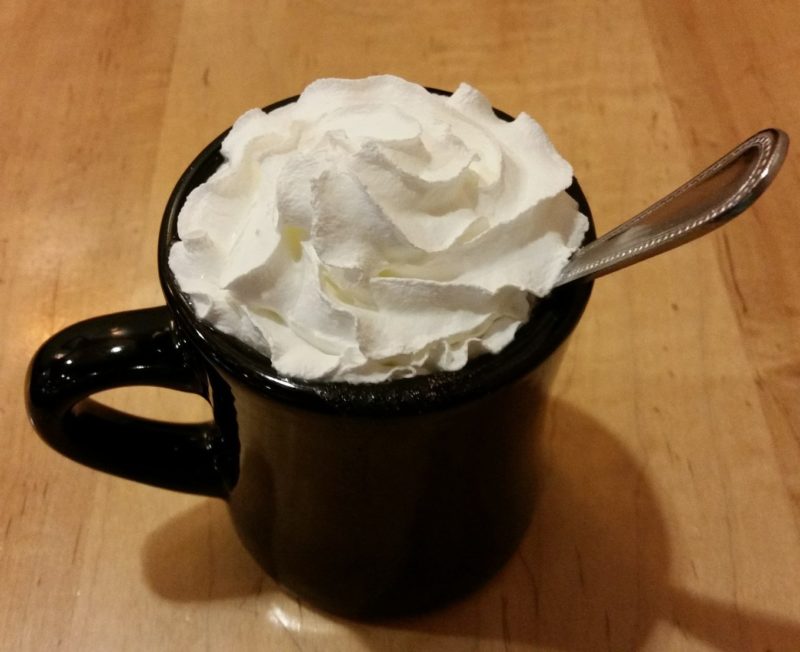 Doug’s Day Diner is a breakfast and lunch restaurant residing among the many shops in Front Range Village. It’s located on the east edge of the Village, near Target and Five Guys.

The interior of the restaurant is interesting. The inside is decorated like a modern home. The walls are made of drywall that is painted beige, and there’s not really any flourish to the interior. There are a couple of half-walls that have simple wooden support beams rising up to the ceiling at the end of each. The walls of the restaurant have lights covered by half- shades. There are also lights in the ceiling and hanging above the tables, keeping it well lit. On one wall is a giant list of the ingredients used, which is painted onto the wall, while on another wall many pieces of artwork created by children as they waited for their food are pinned up. The other walls have close-up pictures of food as artwork. There’s no discernible music playing, instead only offering the chatter of conversation and clink of dishes as background noise. All of these factors give the feeling that you are eating at someone’s house.

The hot chocolate was amazing. The whipped cream on top tasted like it was real cream that was house-whipped rather coming from a can. It was light, creamy and sweet, which made it a really nice addition to the meal. The hot chocolate itself was very rich but not too much so. It also had a good consistency; it wasn’t too watery or too syrupy and it came hot but not scalding. It was some of the best hot chocolate I’ve ever had.

My breakfast came, all on one plate, not too long after the hot chocolate. The sausage was a little crispy on the outside. The meat inside was not lean but a little oily. It was also pretty spicy for regular sausage. On the other hand, the hash browns didn’t have any seasoning on them, and they weren’t very crispy. There were some pieces that were crunchy, but the majority of it wasn’t very fried. I ordered the eggs over-easy, and they were cooked that way, but they also had no seasoning on them. They were also a little bit oily from when they were cooked. I didn’t enjoy any of the sides.

The biscuit and gravy, however, was phenomenal. The gravy was creamy yet wasn’t too fatty or too salty. It also didn’t have too much black pepper, which I find is often an issue with country gravy. It had little chunks of meat in it, which was a nice surprise. There was a nice flavor to the gravy, and it was overall very good.

The biscuit was also really good. Though there was only one, it was of a decent size. The inside was fluffy and the outside was dense. It was slightly sweet and went well with the gravy. The biscuit and gravy was definitely the highlight of the meal.

The tables were averagely clean and the silverware was wrapped so it wasn’t touching the table. However, the service was lukewarm and sparse. My waitress wasn’t rude but she wasn’t very friendly either. She also didn’t refill my water after the first glass. She would disappear for long stretches only to come back later for the check.

Overall, the price is decent since you get a lot of food. Some of the food is really good but some of it mediocre. The interior is a little strange, but not unpleasant, and the service was a little below average. However, the biscuits and gravy and the hot chocolate are enough for me to consider coming back, and there might be other food I like better on their expansive menu.

The clean-cut, covert culinary critic and Collegian writer Capelli D’angelo can be reached at blogs@collegian.com or on Twitter at @Capelli_Dangelo. Leave a comment!!

Have somewhere you want us to review? Send us an email or tweet us!!