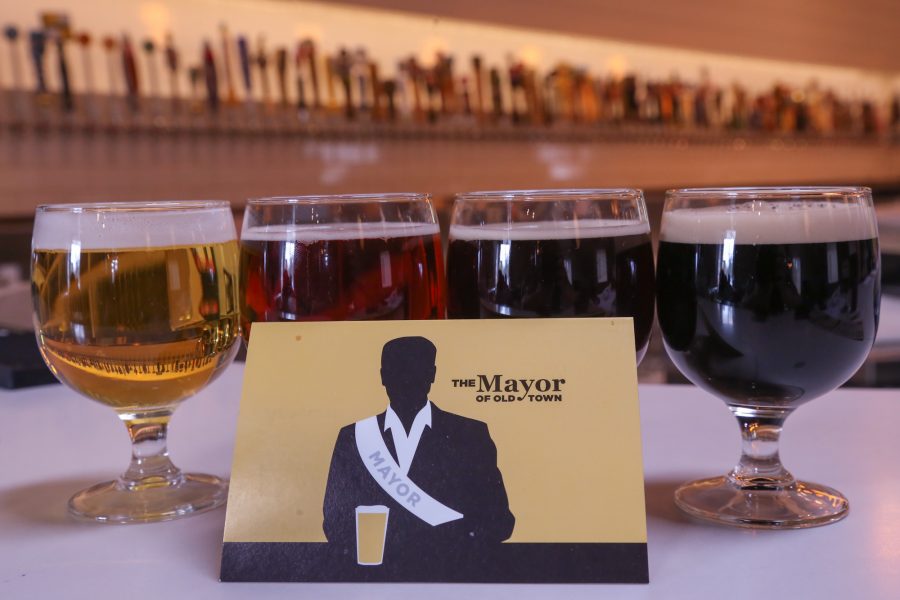 The Mayor of Old Town, located on Mason Street, northeast of campus, keeps 100 beers in tap at all times from a variety of breweries worldwide.

Have you ever gotten home from the liquor store, cracked open the first beer and realized it tastes stale? Have you ever picked up a beer and looked at the expiration date and thought ‘this should still be good’, but it wasn’t? Well, there is an answer for that, and I was given the explanation and warning at my most recent Beer 101 class.

Justin Wright, a certified cicerone (beer expert) and co-owner of the Craft Beer Cellar, let us know why you should be more aware of where you are purchasing your beer, including both liquor stores and bars. In an unbiased standpoint (since he does own the CBC), Wright just wants buyers to know that if your beer tastes bad, its probably because of the location you are shopping at.

There is a whole process when creating beer. Brewers would call it an art, but a lot of the skill is in bottling and aging it, which all should be done by the brewer. That being said, the brewer wants that first sip you take to represent all the work they put into their product. So, don’t let a liquor store or bar with poor quality control ruin your experience.

Wright gave us some examples of when you know the beer has gone bad and what causes it. If there is a cardboard taste, that means the beer has been stored at a warmer than normal temperatures, causing it to become oxidized and thus changing the elements of the beer. All beer travels at 38 degrees Fahrenheit no matter where in the world it is being delivered. So, if it ends up warm, it is because of the place of purchase.

As a beer consumer, you can take the steps necessary to make sure you are getting the quality you are paying for. If you let your beer sit in a hot car, it will take on that cardboard taste, or if you leave it in direct sunlight, it will take on a skunk-smell taste. Both are not very pleasing. So, just don’t do it, but most of all, be aware of where you are buying it.

At the Craft Beer Cellar, their main focus is quality beer handling. Each Monday, they do a quality control where they go around the store and look at all the dates. After two months of shelf life for any beer (no matter the expiration date) they will personally taste it. If it tastes right, it will continue to be sold until the official expiration date. If the beer tastes funky in any way, they will send it back to the brewery because that means it was a bad batch. These are steps that are essential to all beer distributors in order to sell the highest quality beer.

So, next time you are grabbing a cold one, make sure you look, smell and taste for that expiration date.