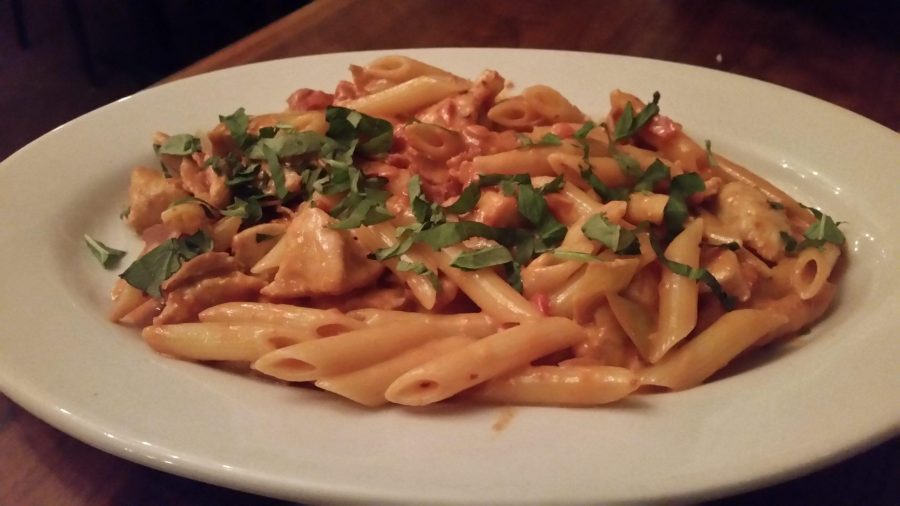 Canino’s Italian Restaurant is an interesting place to eat, as it is housed in a building that was originally a home in 1905, and it shows. Walking into Canino’s is like walking into your rich grandmother’s house. The floor is carpeted, small chandeliers hang from the ceiling, stained glass windows reside in the walls, and there are even bookshelves containing real books from untold decades. What used to be individual rooms of the original house have been converted into multiple small dining areas spread across two floors, which provides a juxtaposition to the one large dining area typically found in modern restaurants.

Inside the dining areas are wooden tables and chairs that have an old feeling to them, and on top of each table is a single rose in a vase. The silverware was laid out flat on a napkin, not touching the surface of the table. The interior is dim but not too dark, with art on the walls and slow, smooth jazz playing softly in the background.

The waitstaff was friendly and quick with their service, checking in with me and ready to take my order. They were also respectable and familiar with the menu, offering advice on what to get. However, they stopped refilling my water after the first time, and I started to get thirsty towards the end of my meal.

I started with the Bruschetta appetizer, which was toasted garlic bread topped with a Roma tomato slice, a leaf of basil, mozzarella, roasted red pepper, and balsamic vinegar drizzled on the top. The balsamic vinegar made the dish both sweet and tangy, and a subtle garlic flavor was also apparent. However, the whole basil leaf was a bit too much, as it was too sharp. If there was shredded basil on top or perhaps half of a leaf, it would add to it. The tomato was ripe and added moistness, and the mozzarella added substance. The red pepper was nice, but there wasn’t very much of it.

I ordered the Genovese as my entree, with the spinach salad as my side. The salad came quickly after I ordered it. The spinach was firm and fresh, and the tomatoes were juicy and sweet. It came with a zesty vinaigrette on the side, which was good poured over the salad. The crouton slice was crunchy and herby, which went well with the spinach and vinaigrette flavors. It had pine nuts and mushrooms that were both soft with different textures, but they didn’t have much of a distinct flavor so they didn’t add to the salad. It also came with half of a boiled egg, which was just like any other boiled egg, so it depends on your preferences.

My entree came not long after my salad, and it arrived hot. The Genovese came with chicken breast, roasted red pepper, artichoke hearts, and prosciutto in a tomato cream sauce over penne noodles. The noodles were firm, and the sauce was creamy and a little spicy; it was really good. The shredded basil on the top was delicious. There wasn’t too much like with the Bruschetta, and it added to the dish. The chicken was firm but not dry, though it didn’t have much individual flavor. The artichoke heart was sour and didn’t go well with the dish. The prosciutto was a little tough, as is to be expected, though there wasn’t much flavor to it. The roasted red pepper was delicious and added great flavor to the dish, but again, there wasn’t enough of it.

For dessert, I ordered the Tiramisu, which was layers of sponge cake soaked with espresso and coffee liqueur then filled with a delicate mascarpone cream. It was moist and had a faint espresso flavor. The whole cake was light but had definite sweetness, and the creme in the middle was very nice – it was my favorite part.

Overall, the food is good but priced too high for its quality. The service was good, disregarding forgetting to fill my water, but that did bring down my meal a little. The atmosphere is interesting and a unique experience. I might return to Canino’s, but it wouldn’t be my first choice, mostly because of the price.

The clean-cut, covert culinary critique and Collegian writer Capelli D’angelo can be reached at blogs@collegian.com or on Twitter at @Capelli_Dangelo. Leave a comment!!

Have somewhere you want us to review? Send us an email or tweet us!!