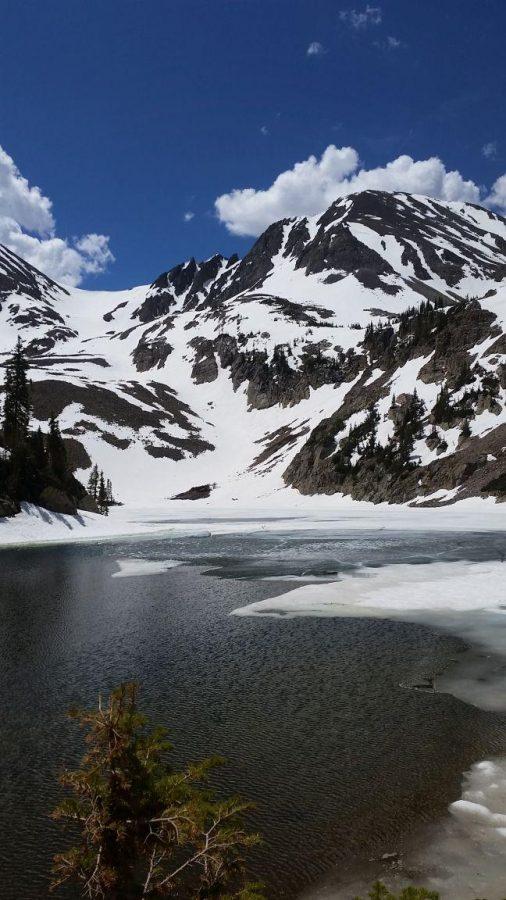 This past weekend, I realized something; I never want to leave Colorado. This state is full of hidden gems and incredible places that so many people don’t know about, let alone take the time to see. I thought I had seen it all between my family road trips and casual cruising, some trips lasting hours. It wasn’t until I moved to Fort Collins that my proud title of Colorado native was humbled a little.

My boyfriend loves adventuring. Don’t get me wrong, I do too, but he has opened my eyes to even more of the incredible state we live in that I never would’ve seen without him. The other day, I found myself loading up the truck with him (and of course my dog) by my side  to go on a hike somewhere in the Poudre Canyon. The location of which I wasn’t aware of until we pulled into the parking lot to start the hike. On the complete other side of the Continental Divide was a trail that led to Lake Agnes.

At an elevation well over 10,000 feet, there was still a ton of snow on the ground, but Colorado being the place it is, the weather was a balmy 70 degrees – perfect for a day hike. We saw incredible plants, beautiful clear water running down numerous creeks , the occasional squirrel and even more snow.

When we made it up the road to the actual trail head, we ran into a problem. Snow had taken over the trail and we were left with only the tree markers to guide us. Winding up and down hills, it came to the point where it was inevitable that we had to trek through the snow if we wanted to make it to the lake.

We eventually came to a valley where we had a clear uphill shot to the trail marker that laid at the edge of the lake. The real difficulty was making it up there. At the edge of the giant 20 foot snow drifts, we found ourselves falling through up to our hips. If anyone had seen our struggle, it probably would’ve been comical.

Eventually we made it to more solid snow, but then I saw something that would bother me the rest of the hike – mountain lion tracks. We had been following someone else’s footprints, and that cat was definitely following the same person we were. I could only hope that if it made the move to eat me, my dog would try to protect me. Let’s be honest though, he would probably have run away. Despite the threat of getting mauled, we kept hiking upward, but on the giant pile of snow, our hiking consisted of falling and sliding all over the place.

When we finally made it to the top, I found myself in the middle of an incredible, jaw dropping view. Any image I had in my head was completely blown out of the water. The ice was still frozen over the lake and the fracture patterns were the coolest things to look at. The random island in the middle of the lake reminded me of a magically movie scene. I can’t even begin to explain how much I wanted to swim out to it, but then I realized I wasn’t in the mood to die of hypothermia. We hiked around the corner, found some flat shelf rocks to sit on and enjoyed some lunch. Talk about the perfect day.

After spending a good amount of time just staring into the crystal clear water and looking at lichen (my boyfriend and I really like nature), we decided to head back down the trail. We wished we had brought a sled or even our snowboards to cruise down that giant snow bank again, but instead, it turned out to be a giant slip and slide. When we made it back to the car, I couldn’t wait to go on another adventure.

Poudre Canyon holds so many trails and is right in my backyard, so I don’t know why I would want to travel anywhere else. If you’re looking for something to do on a gorgeous summer day, take a drive up the canyon and see the possibilities of great adventures.

Collegian writer Katelyn Mitchell can be reached at blogs@collegian.com or on Twitter at @mitch_kate_.