The Rocky Mountain Collegian • May 29, 2016 • https://collegian.com/blogs/2016/05/survey-shows-high-intoxicating-substance-use-in-colorado/ 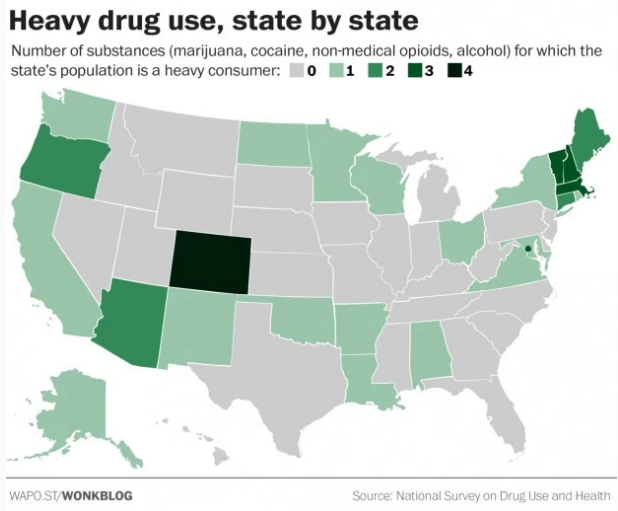 (Photo credit: National Survey on Drug Use and Health)

A recent survey released by the Substance Abuse and Mental Health Services Administration suggests that Colorado is using drugs and alcohol at a high rate. According to the Denver Post, Americans aged 12 and older were surveyed about their use of four types of drugs: alcohol, opioids, marijuana and cocaine. Colorado was one of few states to rank highly in all four categories.

Organizers of the study argue that high marijuana use in Colorado is due to recent legalization. Other states where it is legal such as Washington, Oregon and Alaska also showed heavy marijuana use.

However, Colorado also showed high levels of cocaine and opioid abuse. Cocaine appears to be a popular drug in several other western states too, such as New Mexico, Arizona and California. Surveyors said this is due to their proximity of the Mexican border.

Colorado showed high levels of opioid abuse as well, but New England showed even higher rates of use, often without a proper prescription and in most cases without a medical condition requiring pain relief.

To read more about the survey or for a breakdown on the pattern of substance abuse across the country, check out the full article.