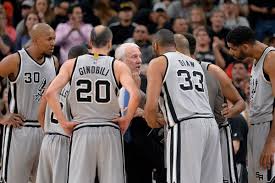 Spurs-Thunder: For the last NBA Heat Check of the year, here is a look at the most interesting series so far in this playoffs.

For Game 1, it hardly seemed like the opener for “the most interesting series.” The Spurs ran train over the Thunder, winning 124-92. It was an exceptional game for Spurs forward LaMarcus Aldridge, as he shot a blistering 18-23 from the field en route to a 38 point performance.

This was really a throwaway game for the Thunder, as they came out flat on both ends of the floor. One big takeaway from this game, however, is the Thunder just plain shouldn’t have Serge Ibaka guarding Aldridge. For one, Aldridge’s shooting ability pulls Ibaka away from the paint, where he offers valuable rim protection. Secondly, Ibaka can’t hang with Aldridge in the post, which is clear from the fact he only missed five shots all game.

Most of this game was garbage time, as the Spurs took a commanding lead early. There wasn’t too much to draw from this game otherwise, and this result probably won’t be indicative of the rest of the series. This was clearly shown in Game 2.

Now, this was more like the Spurs and Thunder I know. A closely contested game with just an insane finish. According to the referee report given after the game, there were a total of five missed no-calls on the last play.

First, Manu Ginobili, the Spur guarding the inbounder, stepped on the sideline, which should have warranted a technical foul. This was followed up by the inbound, Dion Waiters, elbowing him in the face, which is an offensive foul. This was then followed up by a loose ball foul committed on Kevin Durant by Danny Green. Then, this crazy thing happened.

A fan actually grabbed Steven Adams, which is just insane. And, the fourth missed call on the possession. The fifth and final missed call was on Serge Ibaka, who held LaMarcus Aldridge on the rebound of the air ball by Patty Mills. All in all, just an insane finish.

The fact the Thunder managed to steal on in San Antonio is just huge for Oklahoma City, especially after the beat down they took in Game 1. With the series headed to Oklahoma City, here are some keys in my mind that are important for each team.

Serge just can’t handle Aldridge, and needs to stay by the rim for his shot blocking. This leaves Adams, who has been huge for OKC all playoffs. He’s a very physical player down on the post, and should disrupt Aldridge’s rhythm on the block. He also didn’t offer a whole lot in terms of rim protection, so he won’t be missed when he is forced to go out around the arc to stop Aldridge from shooting outside.

The Spurs could have a lineup that really punishes the Thunder for playing Ibaka, with Parker-Green-Leonard-Diaw-Aldridge. This small-ball lineup forces Ibaka to either guard Diaw or Aldridge, both of which whom are capable shooters. This drags Serge out of his comfort zone, and Diaw is a pretty versatile defender and excellent passer. Now I’m not one to question Pop, but I feel like this could make Billy Donavan think twice about where and when to play Ibaka.

Kawhi Leonard needs to step it up

What has been kind of lost in this series is the rather pedestrian play of Kawhi Leonard. It has been overshadowed by the incredible play of Aldridge and the craziness of Game 2. If the Spurs hope to win this series, it will come down to Leonard playing how he did in the regular season, not going 0-6 from three like he did in Game 2.

I can’t wait for Game 3, which I think will really set the tone for the rest of the series. If the Spurs win, I don’t see the Thunder bouncing back. If OKC manages to defend their home court, we most likely have an epic Westbrook-Curry and Durant-Draymond battle waiting in the Bay.