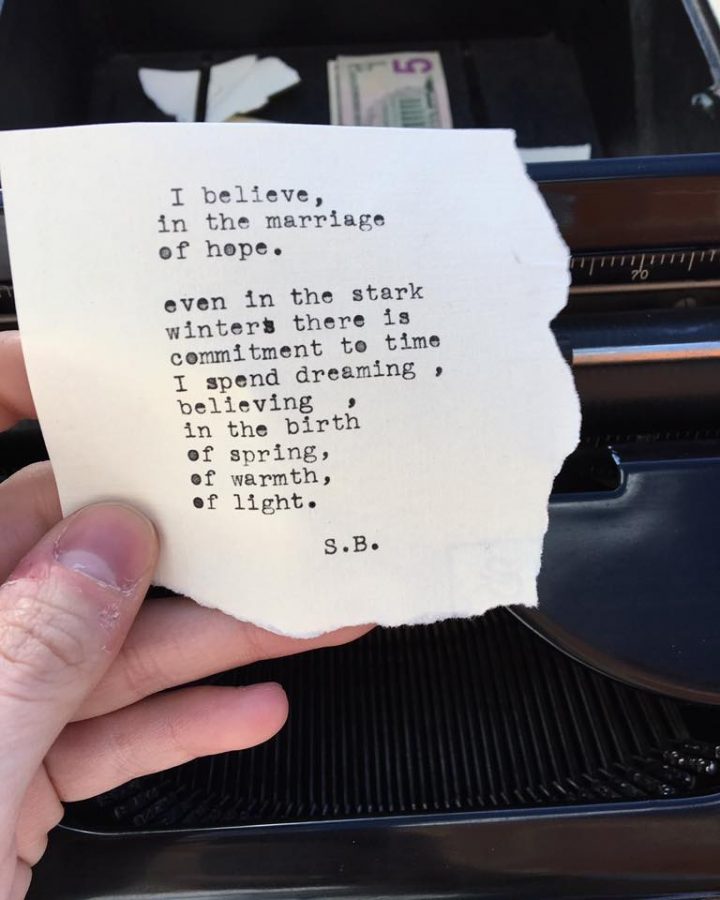 Inspiration comes in different ways, but for the local poet Andrew Bohn, it comes in the form of another person.

“They are that initial spark, and then I just let it ignite on the typewriter and see where it goes,” Bohn said.

Every Saturday, if the weather permits, you will find Andrew writing poetry for whoever passes by on his black Royal typewriter. Next to him is a hand-made wooden stand with a sign that says “poems.”

The only thing he asks for is a few minutes of your time and three to four words. He jokingly says, “What’s the worst that could happen? Get a bad metaphor, lose an eye?”

For Bohn, this is a recent endeavor. Even though he has been writing and making things his entire life, he decided that he would write on the streets of Old Town in the fall. So far, he has written 170 poems.

Bohn is often captivated by words and the inspiration they bring him.

“They come along, they have this life story, this whole narrative they have, and I take four or five of their words, and then I turn those words into a poem,” said Bohn.

He was inspired by his good friend who he met in Seattle who was a street poet and by his previous work as a carnival barker.

“That engagement of people and having a reason to delve into things a little bit and say, ‘Hey, stranger, come here, step right up,'” Bohn said. “And I was missing that from my life, so I decided to do this because it was a venue for it.”

I also had a typewriter and joined him for a couple hours of writing. At first, I was a little bit nervous. I write often, but I have never written spontaneously and given it to a random stranger on the street. It was completely out of my comfort zone.

While scary at first, when I started to type, my worries vanished and I was immersed in the experience. Each poem took about two minutes to complete.

Once we were given a few words and typed up a poem, we would play rock, paper, scissors to decide who would read the poem we finished first. I wrote about five or six spontaneous poems in those few hours I spent.

To see their excitement motivated gave me the energy to write more as the day went on. Their positive energy validated what I was doing, and made me more confident when I was writing.

Bohn says that oftentimes the main obstacle to creating something is self-judgement and self-criticism.

“To be able to let that go will allow you the space to make what you’re actually supposed to be making, and do something great,” Bohn said.

Fear is one of the biggest obstacles for me when I am trying to create. While I am still learning how to let go of those negative thoughts, the few hours I spent writing spontaneously helped me a lot.

I learned a lot of things from this experience. One of the greatest takeaways is that getting out of the comfort zone is where the magic happens. When you don’t know what to expect, that is the greatest opportunity to surprise yourself.