Beer Me at the Mayor of Old Town: Space Ghost IPA by Equinox Brewery 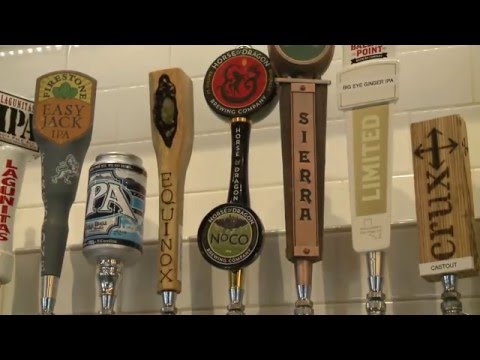 Space Ghost IPA is an IPA with an Alcohol By Volume of 6.4 percent and an International Bitterness Units of 78. The brewery behind this beer is Equinox Brewery, a Fort Collins native that is located on Remington Street in Old Town.

Since the IBU scale is out of 100, 78 is relatively high in hoppiness and bitterness. However, as with a lot of IPA’s, after you get used to the bitterness taste, you will start to get a lot of fruity and complex flavors from it.

One interesting fact: In order to get this beer on tap at The Mayor of Old Town for me to drink, an Equinox employee biked a keg (or 2) directly to The Mayor.

Equinox has a policy that they will only deliver beer to tap rooms and restaurants that they can bike to. This is to decrease their carbon footprint. They make a custom, industrially-built bike specifically fit for holding and transporting kegs.

Because of this fact, I decided to dedicate this review to the brave person who had to bike 2 kegs from Equinox Brewery to The Mayor.

Overall, Space Ghost IPA was a very smooth IPA that has flavors of citrus and grapefruit. I tend to get a lot of grapefruit flavors from IPA’s anyway so this beer gave me that IPA familiarity, which was nice. I got some flavors or orange peel or coriander and even though this beer didn’t actually contain those ingredients, I felt like I tasted it. Overall though, it was mainly a nice citrusy, grapefruity taste. For an IPA though, simple is key for me.

Another thing I noticed about this beer was the color. It had a very light amber color to it and it almost felt at times like I was drinking a Pale Ale, rather than an Indian Pale Ale. However, that was only reflected in the color – the taste had IPA all over it. I appreciated the color because it almost tricked my mind into thinking it was a lighter beer than it actually was, and though it is not uncommon for IPA’s to be lighter in color, I really liked that aspect of this beer.

But, the number one thing about this beer that changed my mind on it was the smoothness. It was incredibly smooth. It was hoppy for sure, but that did not make it hard to drink. The way I like to put it, is that it was easy to drink for an IPA, but it didn’t let you forget it was still an IPA. It would be a good introductory IPA for a non-IPA drinker. It was a beer that I could see myself drinking whenever I was in the mood for an IPA, or whenever it was on tap. The Mayor’s rating for this brew is a 9 out of ten. Overall, I give this beer a 7.8 out of ten. However, I want to note that I am not a big IPA person, and that this beer was one of my favorite IPA’s so far.

Collegian Beer Reviewer Gabe Pocrass can be reached online at blogs@collegian.com or on Twitter at @gpocrass.