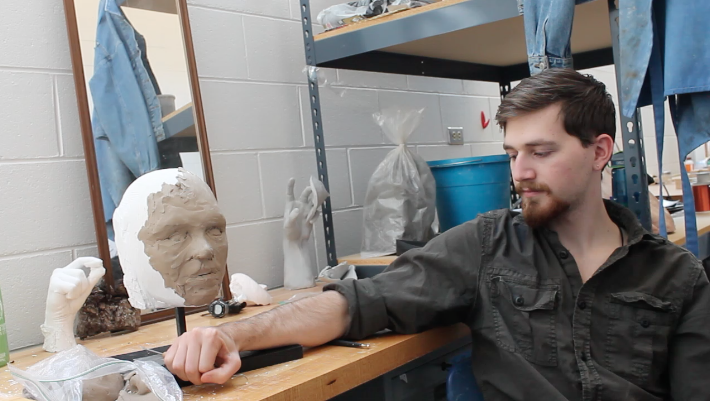 Sebastian Smith in the studio with one of his pieces (Photo Credit: Seth Bodine.)

Colorado State University senior Sebastian Smith has been an artist his whole life — whether it was drawing in his sketchbook or creating 3-D art, he was always creating something.

During his freshman year of college, Sebastian Smith found himself severely unhappy with studying mechanical engineering. Instead of doing his homework, he found himself doing small art projects.

“I made a couple of rings, I made a flower out of paper clips and gum wrappers and I was doodling in my notebook all of the time,” Smith said.  “I realized that the reasons I went into engineering were better reasons for me to go into art.”

At the end of his freshman year, he chose to study the aesthetic application of the process of creating instead of the logical, functional method, and changed his major to art with a concentration in sculpture.

His work is largely concentrated on the human figure and the big philosophical question of, “What are we doing and why are we doing it?”

Smith says that he uses the human form because of how effective it is in communicating.

“You look around and a lot of the work that is done by modern artists or contemporary artists, and it’s heavy in the concept, but it’s really hard to understand sometimes if you don’t an art background,” Smith said. “And I find that the human figure is universally easy to read instead of just, say, lines, shapes or colors.”

Smith said he wanted to play with movement and how it plays into the static nature of sculpture. While Smith usually uses himself as a model for his work, he tries to work from life as much as he can.

“Like, if I think I need a particular set of hands, I’ll simply cast their hands and use that cast to reference,” he said.

While he uses a lot of clay for his work, Smith said he tries to use all the materials he can get his hands on. He has worked with oil or water based clay, plaster, metal and stone.

He also has a fascination with working with metal.

“I have a fascination with this thing that is so hard and so unyielding to my bare hands, can be put in a fire and bent, and molded, and shaped and then again it retains its shape, and then there’s this, just, beautiful color that can happen with metals,” he said.

There is a certain level of detail and craft in Sebastian Smith’s work that is fascinating to me. It can be seen in many of his works, but one that caught my attention is a piece called “That Which We Cannot Have.” Upon inspection and looking at pictures of the work from different angles, you can see the small details such as lines in the hands or details of the broken object that the hand is reaching for.

His newest work will deal with secrets, and he plans on letting viewers directly interact with it instead of just looking at it. The statue of the face will feature a lock mechanism in which viewers have to physically participate to understand it fully.

In his free time, he enjoys social dancing on the weekends at dance venues such as Indigo Blues in Old Town, Fort Collins. In the future, Smith said he would like to create something about dance.

“I think the movement that is created, especially in contemporary dancing, is absolutely beautiful, and even social dancing — I think there’s something interesting in there that I’d really like to explore,” he said.

He has two methods of working. One way is to get the material and work with it directly to inform his process.

“Say I have a stone. I will just take my chisel and start working on the stone without any preconceived notions, and then through that process, the stone kind of talks to me in a way and says, ‘This is what I want to be.’ So I kind of listen, pay attention to what the stone wants and kind of carve it in that manner.”

The other process is to work with a concept or idea that he really wants to talk about. He then sits with a sketchbook and writes, exploring the idea. Next, he goes to the computer to see what other artists have done. He also sketches and questions factors of it, such as why he used colors and form.

To be an artist and constantly create is a hard thing to do. However, Smith’s dedication to his art is admirable. Fridays, you can find him in his studio working on something while blaring rock music, or what some people in the art studio call his “angry music.”

Smith’s advice to other artists is to keep creating, even with the inspiration blocks.

“I will take out my sketchbook and scribble. My sketchbook is filled with meaningless dribble — ridiculous drawings that don’t make any visual sense. Really bad work, and that’s how you move through it,” he said. “You just have to make something, and once you allow the process of creativity to start flowing, it becomes easier to become engaged. It becomes easier to become excited about something.”

Ideally, Smith wants to become famous within five years of graduating while living in Seattle, Washington. However, he said that he would really just like to get out in the world and connect with other people through his art.

You can find out more about Sebastian Smith and his artwork on his website.