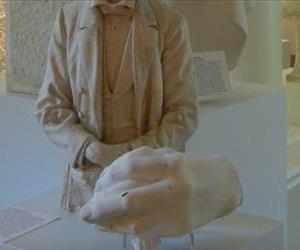 You read that right. No, we aren’t kidding.

“Of all the likely crimes to rock a small Illinois town, “art theft” may not immediately come to mind. But that’s the baffling and frustrating reality that Kankakee,population 27,000, has been dealing with since Dec. 11—or thereabouts. The New York Times reports a plaster sculpture of President Abraham Lincoln’s hand has been missing from the Kankakee County Museum since at least then, but it’s a crime void of witnesses, suspects, and even a firm timeline. The Times reports that the museum initially hoped it would be a short-lived prank. When that didn’t turn out to be the case, the Kankakee Police Department posted a Facebook plea for information and a description of the hand, via the museum curator, as “approximately ‘the size of a 8-10 pound ham.'” Its estimated worth is $5,000, though a local historian tells the Times, “There’s almost no way to put a value on something like that because there’s no market.””