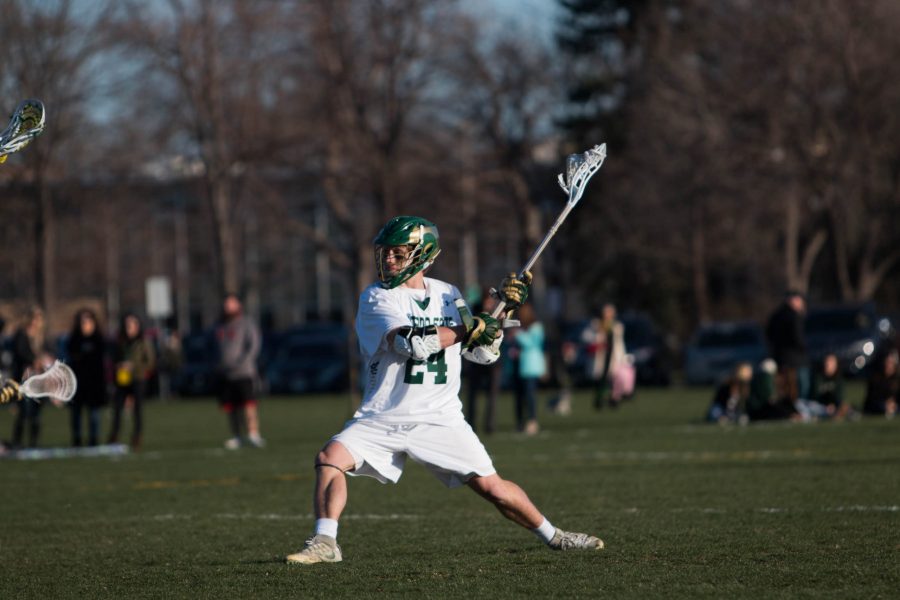 Senior AJ Stewart makes a pass during the first quarter. CSU lost to Cal Poly with a score of 9-7. (Julia Bailey | Collegian)

There is no question that Colorado State club lacrosse senior midfielder AJ Stewart has been through a lot during his time in Fort Collins. He’s faced tough obstacles and many bumps in the road, but one thing remained the same – he is the ultimate competitor.

During his freshman season, Stewart tore his ACL during the 11th game of the season. He missed the rest of the year with this injury, but he was poised to make a comeback onto the field.

With a lot of hard work and dedication, Stewart made a return back to the field his sophomore season. He and the team were doing very well until he suffered another setback. Stewart tore his ACL in his other knee during the final few games of the season.

This was hard on Stewart because of all the hard work he put in to recover from his last injury.

“I was devastated and honestly couldn’t believe it happened,” Stewart said. “It’s difficult when you put in the hard work and that happens.”

Stewart decided to redshirt his junior season. This allowed him to recover fully from his injury while keeping his two years of eligibility.

As his senior year began, Stewart was back on the field and ready to go. He was determined to get through the entire season without an injury. Unfortunately, another set back occured during the 16th game of his senior season.

Stewart tore his meniscus and five tendons in his right arm and missed the remainder of the season.

“I never thought about quitting. I had a lot of motivation to come back and do what makes me happy,” Stewart said.

As this season started, Stewart was ready to play the best that he could to help the team while being healthy for an entire season. So far, so good. Stewart is currently having the best season he’s ever had, doing all he can to help the team win, something that is evident during the last three games.

During the three-game span, Stewart recorded nine goals, including two hat tricks. Stewart played red hot and it seemed as if everything he shot was going in.

“I am expected to help and lead the team and that is more important to me than scoring those goals,” Stewart said.

This not only shows how good of a player he is, but how good of a teammate he is. He doesn’t care how many goals he scores or assists he has. He will do anything his team needs him to in order to try and win the game.

With only a few games left in his final season, Stewart is hoping for a strong finish from himself and his teammates as well.

“There are still three huge games left,” Stewart said. “Although some people might think we are out of the tournament, we can win these three games.”

Stewart has had a lot of support throughout his time here at CSU. Whether on the field or during his injuries, his family, teammates and coaches were always there for him. One person in particular that always pushed Stewart and showed him the ropes was his former teammate Ashton Monheiser.

Monheiser played midfield for the Rams and graduated last year. He played four years and was known for being a great goal-scorer and a leader of the team. Stewart gives a lot of credit to Monheiser for helping him become the player that he is today.

“Ashton was a great athlete. I got to know his tendencies and I got to learn from him every single game,” Stewart said. “He was also a greater shooter and goal scorer. Seeing him get to 50 or 60 goals in his career was pretty cool. Finishing outside and close to the net were things that I learned from him detail wise.”

“I’ve always seen AJ as an amazing player and always had the utmost trust in him. I think we had a lot of similarities. We both play our hearts out, read offenses well, and find ways to get the ball in the back of the net,” Monheiser said. “He’s played absolutely lights out. Definitely a top leader that we have on the team. To have the mentality he has after major surgeries is a huge piece. Many players are never the same after knee injuries and he has come back stronger twice.”

With just one game remaining in the regular season, Stewart aims to continue his successful season on Saturday, April 21 against Colorado in Boulder.