No. 19 Colorado proves to be too much for Colorado State women’s basketball 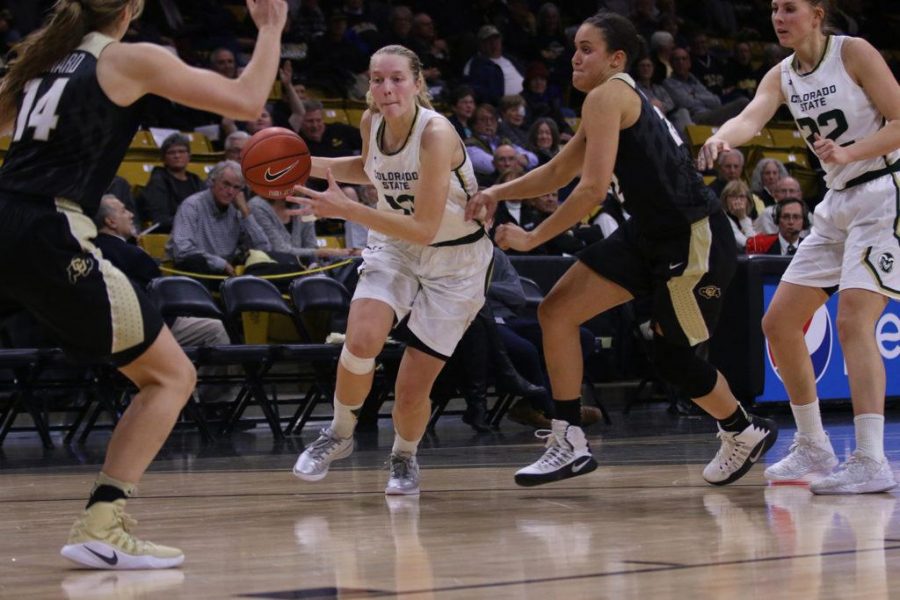 Senior Ellen Nystrom drives through a hole in the defense towards the hoop on December 8, 2016 against CU. (Elliott Jerge | Collegian)

One week after the men’s team went into Boulder and came away with a 14-point upset, the Colorado State women’s basketball team lost 74-56 at No. 19 Colorado in Boulder.

The Rams came out hot, jumping out to an early 6-0 lead, but the Buffs quickly gained the lead and really were in control for most of this game. Led by sophomore guard Kennedy Leonard, who put up a career-high 30 points, the CU offense thrived on perimeter shooting and made a living from beyond the arc. Leonard finished the night with seven made three’s, tying her previous career-high and the Buffs finished 10-26 from beyond the arc on the night.

The Colorado State offense was up and down, as the Rams saw some success in the paint, but turnover issues really cost them. CSU turned the ball over 15 times Thursday night, resulting in 15 points for Colorado and that was the biggest difference in the game.

In the first half, CSU was able to get the ball in the post and get high percentage looks from the around the hoop. At the break, the Rams were trailing by seven but were shooting 61 percent from the field and playing to their strengths as a team. That completely changed in the second half.

CSU could not buy a basket coming out of the break, missing four wide open three’s and two layups in the first seven minutes of the third quarter. Ultimately the Rams got away from their identity early in the second half and never were able to regain the rhythm they possessed in the first two quarters of the game.

Defensively, the Rams were played pretty solid against a really explosive Colorado team, but second-chance points and points from turnovers killed CSU tonight. Colorado dominated the offensive glass, out-rebounding the Rams 12-2 and were able to capitalize on a lot of second chance opportunities.

CSU will look to get back on track Sunday Dec. 11, when they play host to New Mexico Highlands at Moby Arena.