What to know for CSU football’s 2022 season 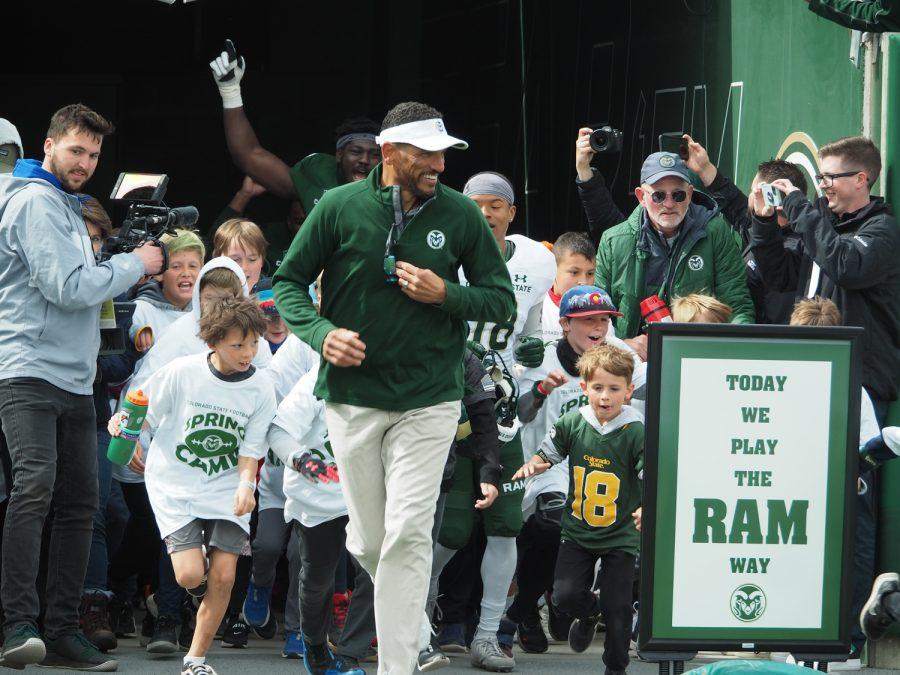 Colorado State University head football coach Jay Norvell leads the participants of the spring youth camp out of the tunnel April 23. "We want our team to be a part of the community and engage in the community," Norvell said. "When we go out and play on Saturdays, we need our community."

After winning just three games and finishing on a six-game losing streak last season, excitement has been restored as Ram football fans await a team with a new look this season. With the 2022 Colorado State University football season right around the corner, here’s what to know about this year’s team.
The schedule
The CSU Rams will kick off the season Sept. 3 with a tough away matchup against the University of Michigan in Ann Arbor, Michigan, before returning to Fort Collins for their Sept. 10 home opener against Middle Tennessee State University.

The team will then travel to Pullman, Washington, to take on Washington State University Sept. 17 before concluding nonconference play at home with an orange out against Football Championship Subdivision California State University, Sacramento on Sept. 24. It’s a challenging slate of nonconference games, with all four opponents having winning records in 2021.

After a bye week, Jay Norvell’s Rams will open conference play against familiar faces, taking on the University of Nevada, Reno on the road Oct. 7. They’ll return to Canvas Stadium to face defending conference champions Utah State University for Homecoming Weekend Oct. 15. The schedule then brings the University of Hawaii to Fort Collins Oct. 22 before sending CSU on the road to play Boise State University Oct. 29 and San Jose State University Nov. 5.
“Just like the coaching staff, the team’s offense will be full of new personnel. … This year’s quarterback room is about as young as it can get — all four quarterbacks on the roster are freshmen.”
The annual Border War rivalry game against the University of Wyoming will take place in Fort Collins this year; the Rams will try to take the Bronze Boot back Nov. 12 after losing it in Laramie, Wyoming, last year.

The next week, the Rams will travel down to Colorado Springs with the goal of beating the United States Air Force Academy for the Ram-Falcon Trophy for the first time since 2015. The regular season will conclude Nov. 25 against the University of New Mexico at Canvas Stadium.
The coaching staff
To the relief of most CSU fans, the coaching staff was completely overhauled in the offseason.

CSU also added some experienced coaches from other schools. Special teams coordinator Tommy Perry, who won the 2021 Conference USA championship with the University of Texas, San Antonio and defensive coordinator Freddie Banks, who helped lead Montana State University to the 2021 FCS National Championship game, are two such coaches looking to replicate their success at Colorado State.
The offense
Just like the coaching staff, the team’s offense will be full of new personnel. Todd Centeio, last year’s starting quarterback, transferred to James Madison University in the offseason. This year’s quarterback room is about as young as it can get — all four quarterbacks on the roster are freshmen. The likely starting quarterback, redshirt freshman Clay Millen, was a four-star recruit by 247Sports before redshirting last year at Nevada.

At running back, redshirt senior A’Jon Vivens and fifth-year David Bailey will return from last year. Vivens, who is a former wide receiver, could carve out a role as a receiving back in Norvell’s pass-heavy offense. The team also added Nevada transfer Avery Morrow, whose career-long rush of 42 yards came against CSU in 2021.

In the wide receiver room, seniors Ty McCullouch and Dante Wright, the top Ram receivers returning from last year, will be joined by a pair of Nevada transfers: senior Melquan Stovall and junior Tory Horton. Mekhi Fox, who committed to CSU after decommitting from the University of California, Los Angeles, headlines a talented group of freshman receivers.

It won’t be easy to replace dominant tight end McBride, but redshirt freshman Tanner Arkin will have the chance after being named to the 2022 Mountain West Conference preseason all-conference team. The offensive line is another spot where transfers will likely make a big impact, with players such as Nevada transfers Gray Davis and Jacob Gardner poised to have starting roles.
The defense
The defense won’t be overhauled quite like the offense, but there are still a number of additions. On the defensive line, senior end Mohamed Kamara will continue to start after a quality 2021 season. Rutgers University transfer CJ Onyechi is a veteran choice to replace Scott Patchan at the other end position. The linebacker position won’t see much change — last year’s starters Cam’Ron Carter and Dequan Jackson will return as crucial members of the defense.

The bottom line is: Between a completely revamped offensive system and quality additions across the board, Ram fans have good reason to be excited for this season.