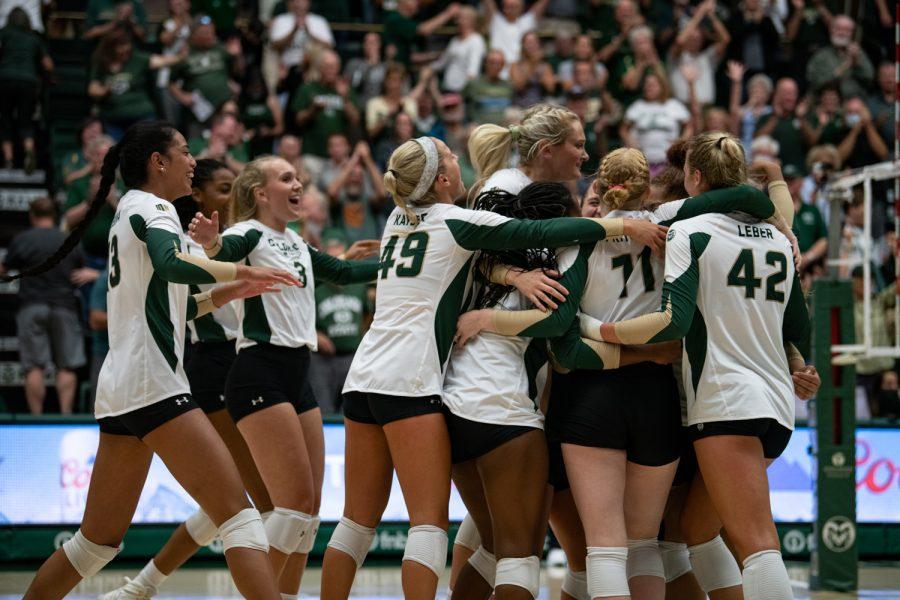 Less than a week into the season, the Colorado State University volleyball team has welcomed back Moby Madness with open arms. In only three games, the Rams have served history, entertained many and continued to work on perfecting their gameplay.

Colorado State has a 2-1 overall record, starting off strong early in the season. Notably, the CSU Rams volleyball team began with a 2-0 lead for the first time since 2016 before most recently falling to the University of Northern Colorado in an intense 3-1 match.

Compared to last season, the Rams have already shown stellar improvement on the court. Colorado State started their last season 0-3, losing to both UNC and the University of North Carolina at Chapel Hill 3-2. Regardless of the past, the Rams dominated the season-opening game against North Carolina with a 3-1 win, surrounded by 5,962 fans in support — the eighth-largest crowd in CSU volleyball history.
“I think we’ve done great. Honestly, this year compared to last year we’re in a great spot, but we’ve had a pretty hard preseason.” -Ruby Kayser, defensive specialist
These stats would be impossible without the dedication, teamwork and ace-style performances the Rams have worked diligently for. As a team, the leaderboards are stacked high with 143 kills, 131 set assists and 119 defensive digs so far. Looking at the season leaders so far, it’s clear Colorado State values collaboration and alliances.

“I think we’ve done great,” said Ruby Kayser, junior defense specialist. “Honestly, this year compared to last year we’re in a great spot, but we’ve had a pretty hard preseason. … We will scout tomorrow and work a lot on the serve and pass game — … just scouting the teams and letting this one go and focusing on the next three will be huge.”

This is far from the end for the Colorado State Rams as they prepare for another three-game homestand against three new opponents this season. To kick off the weekend homestand, Colorado State will continue in Moby Arena Thursday, Sept. 1, against the University of Arkansas at 7 p.m. followed by Florida Gulf Coast University Friday at 7 p.m. Last but not least, the Rams will finish off the weekend battling Alabama State University at 1:30 p.m. Saturday.
“Just having the mindset of persevering through adversity … (benefits) our playing and working through that as a team.” -Karina Leber, middle blocker
With a packed weekend ahead of them, the Rams will need to work past their errors against UNC and embrace a stalwart mindset to continue with a strong first set of matches. Currently, the Arkansas Razorbacks are 1-1 overall after the Arkansas Classic this past weekend. The FGCU Eagles are currently 3-0, making them our biggest opponents this weekend. Lastly, the Alabama Hornets are on a four-game losing streak with an overall 0-4 record so far this season.

The upcoming matches are vital to the Rams’ overall record because these will be their last home games before hosting the whiteout rivalry game against the University of Colorado Boulder in Moby Arena Sept. 15 at 7 p.m. This is one of the biggest games Colorado State will take on this season, and it grants them an opportunity at revenge after losing the last CU game 3-0.

“Just having the mindset of persevering through adversity … (benefits) our playing and working through that as a team,” said Karina Leber, junior middle blocker.