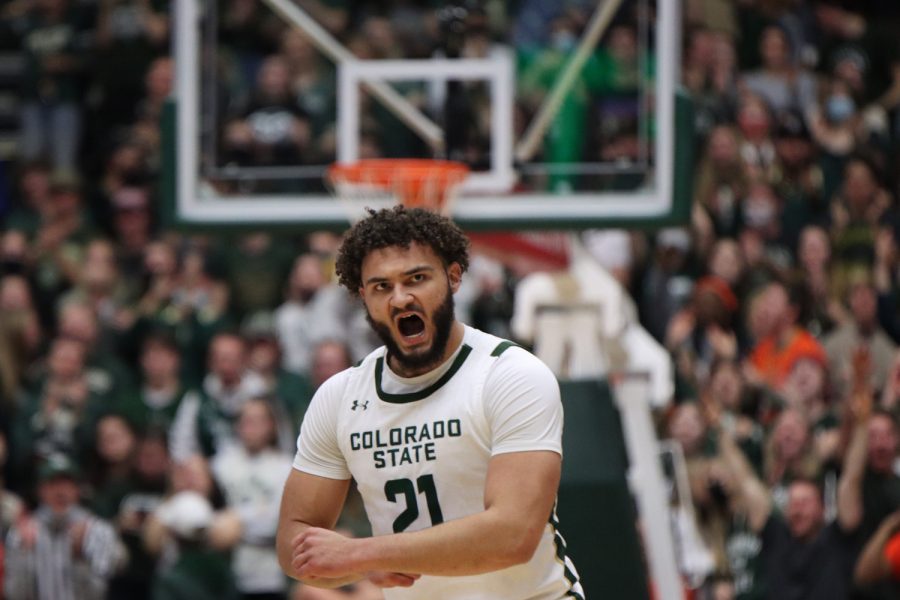 David Roddy (21) cheers after a penalty is called in favor of Colorado State University at Moby Arena during the basketball game against University of Nevada, Las Vegas Jan. 28. Rams lost 88-74.

David Roddy, a junior forward at Colorado State University, has declared that he will sacrifice his senior season of eligibility with the Colorado State men’s basketball team in order to maintain eligibility for the NBA Draft. Since arriving in 2019, Roddy has embodied the true meaning of being a Ram and will be leaving behind a new legacy.
The revival of Moby Madness, winning the right way and above all, accomplishing a childhood dream of playing in the tournament are things I reflect on and cherish as I have gone through this process. After many days of prayer and reflection, I have decided to stay in the draft and pursue my dream of playing in the NBA.”- David Roddy, former CSU basketball forward
Over the past three years, Roddy has accumulated nearly 18 honorable awards for his performance and dedication to the court. His first career award was the Honorable Mention All-Mountain West during his freshman year. Despite COVID-19 intruding on his sophomore year, Roddy gained the First Team All-Mountain West, NABC First Team All-District and the U.S. Basketball Writers Association All-District awards.

With his tremendous leadership and game execution on the court, Roddy took Moby Arena by storm, in what is now his final season with CSU. Roddy was not only noticed by Colorado State supporters, but also by basketball experts all throughout the country.

In the 2021-2022 season alone, Roddy received 14 honorable awards for his outstanding performance and final stretch as a CSU Ram. A few important mentions include being the fifth CSU player to be named to Sports Illustrated’s third team, Honorable Mention All-American by the Associated Press and the U.S. Basketball Writers Association.

During his college basketball career, Roddy reached major milestones and will only continue onto bigger things as he enters the NBA Draft. This article just touches on a small part of Roddy’s accomplishments at Colorado State, but you can keep up with his career by following him on Instagram and Twitter at @droddy22.