The Rocky Mountain Collegian • May 3, 2022 • https://collegian.com/articles/sports/2022/05/category-sports-qa-with-joe-parker-on-csus-newest-nil-deal-with-the-brandr-group/ 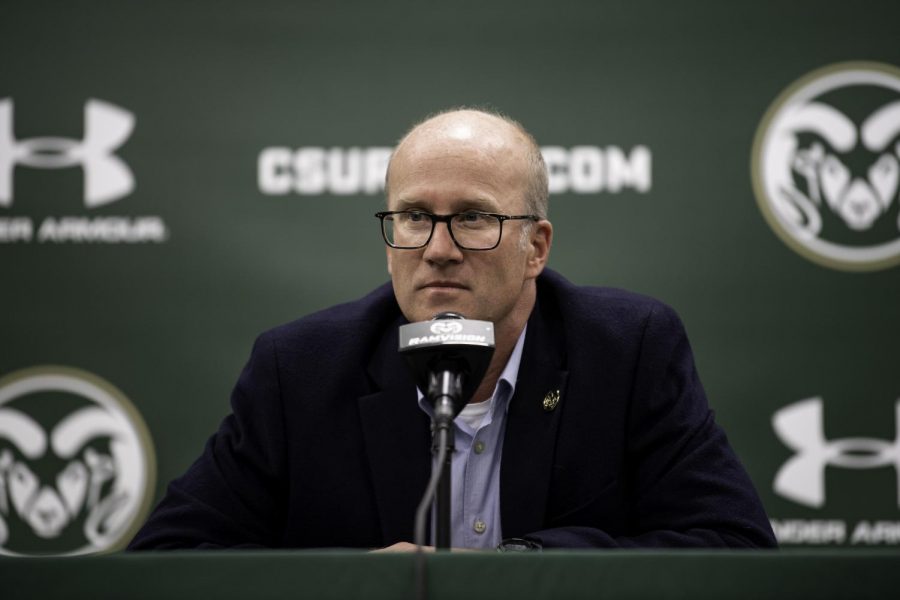 Colorado State University athletic director Joe Parker speaks at a press conference about Steve Addazio being fired from his position as head football coach Dec. 2. Mr. Parker stated, “I think coach Addazio drilled in deeply with these kids, with these young men.”

Colorado State University just reached another milestone in the name, image and likeness space. CSU first reported April 12 that the school reached a group licensing agreement with The Brandr Group, a company that will enter the NIL space to combine select student-athletes’ names, images and likenesses with official trademarks and logos associated with CSU.

CTV’s Cameron Evig and I sat down with CSU Athletic Director Joe Parker and discussed the deal and the details of it along with what it means for the Rams athletics community.

Q: How is the partnership between a student-athlete and the University via jersey sales different from somebody involved with a local business?

A: “The partnership we just struck with Brandr gives our student-athletes the opportunity to work in the licensed good space.  So it would allow a group of students or a few students across a few rosters to work on a licensed goods merchandising program.”
“But I think there’s enough stories on our campus with particular team performances or rosters that there will be future opportunities or ongoing opportunities for our students to leverage this.” -Joe Parker, CSU athletic director
How is this good for not only CSU and its athletes but also the local community?

“The benefit, I think, to the broader community is I think our students are influencers in the social media space; they have some level of notoriety on campus with their fellow students, so it’s an opportunity for businesses that want to partner with our students to help them build bridges to other students on campus. … It’s a win-win for both our students and for local businesses.”

With the new Brandr deal, with jersey sales, do the students have to take up that responsibility themselves within licensing with Brandr, or is that something the athletic department facilitates?

“Brandr takes that responsibility on, so they’ll be constantly kind of surveying our program, understanding our rosters, developing stories — things that they can capitalize with, like a hot market T-shirt that they can use when they facilitate the licensing agreement with a group of students.

“It’s not really (the athletics department) that’s prompting that, and it’s certainly not our students. … I think, of those three entities — the department, the students themselves and Brandr — I think if there’s concepts or creative ideas that come up, we can kind of push those forward to Brandr and see if they want to take advantage of it.

“There’s market risk, right? They want to do something that’s going to have some level of popularity where they can generate revenue and in turn a margin of profit, so they’re going to be selective when they do that. But I think there’s enough stories on our campus with particular team performances or rosters that there will be future opportunities or ongoing opportunities for our students to leverage this.”

Do you know of any student-athletes who Brandr has reached out to and started those conversations with?

“(I’m) not aware of that. I mean, it’s a pretty new partnership for us right now, and we’re closing in on the end of an academic year, so a lot of the sports programs have completed seasons. So I think it’s something that will present opportunities through the summer and certainly as we move into the new academic year.”

As the partnership between CSU and The Brandr Group goes on through the summer into the next academic year, Rams fans can expect to see a change in merchandise at games. The hope is that sometime in the near future, jerseys and other forms of merchandise that include the names of fans’ favorite Rams will be available to purchase.