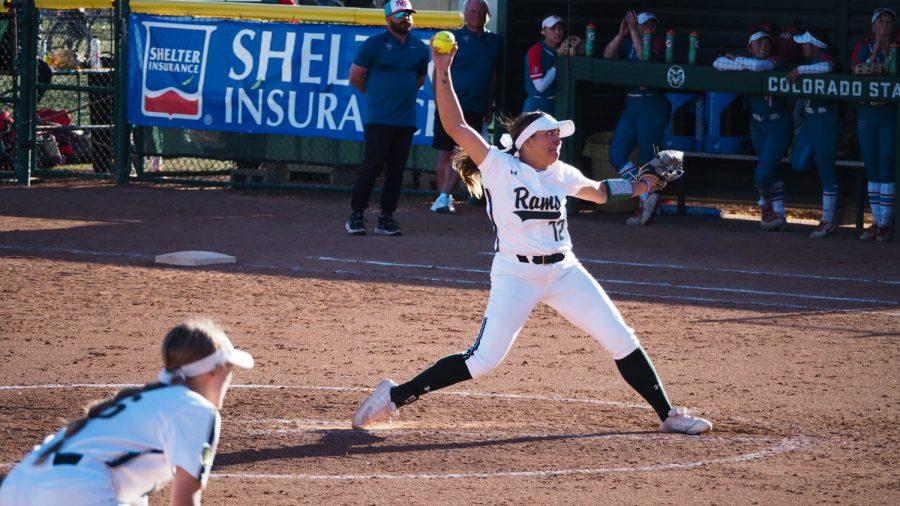 Colorado State pitcher Julia Cabral (12) pitches the ball against the University of New Mexico April 8, 2022. The Rams won 5-2 against the visiting Lobos.

The inner-state rivalry continued Tuesday with the Colorado State University Rams (14-20) softball team heading off to face the University of Northern Colorado Bears (17-24). The game was postponed from last week, but that didn’t harm the Rams, as they took a 10-1 victory over the Bears.

The first inning ended with Ashley York hitting a single, then Peyton Allen moving her into scoring position with a sacrifice bunt. Ram Hailey Smith nailed the ball to score York in for an RBI to take the lead. The Bears would stay scoreless in the first inning.

Throughout the second inning, the Rams didn’t make it over home plate, but the Bears managed to get a runner on base with a walk. Following that, UNC hit a triple to get the runner in for an RBI.
“The Rams finished with an exciting away win, 10-1, now sitting at number five in the Mountain West Conference.”
In the third inning, the Rams went on a five-hit and six-run scoring streak, taking an early, vast lead, 7-1. This would begin with Makenna McVay at the plate with runners on first and third, hitting a single to score both runners in. Ram Brooke Bohlender continued by hitting the ball to where the Bears made an error and advanced McVay to third.

Ram Morgan Crosby kept the momentum going after a pinch runner for Bohlender by creating a score for McVay. Then Ashley Michelena hit a single and scored another RBI. The inning ended with York scoring two runners on base but being thrown out at third.

That’ll do it from Greeley as we record the second most hits in a game this season to cruise past the Bears! #MakingHerMark

In the fourth inning, neither team was able to get runners back to the plate. But come the fifth, Bohlender was able to hit a single, bringing Crosby next at bat. The Bears followed with a throwing error, forcing both runners into scoring positions after Michelena took the opportunity with a hit. York created a similar play close after, getting Bohlender to home base.

The last three innings remained scoreless for Northern Colorado, but in the final inning, the Rams got four hits and scored two runs off of them. The Rams finished with an exciting away win, 10-1, now sitting at fifth in the Mountain West Conference.

Colorado State softball will head out of state for their next matches to take on the University of California, Fresno this weekend for a three-game series to continue their journey through Mountain West play.