Outlaws of Moby’s dreams come true thanks to Medved family 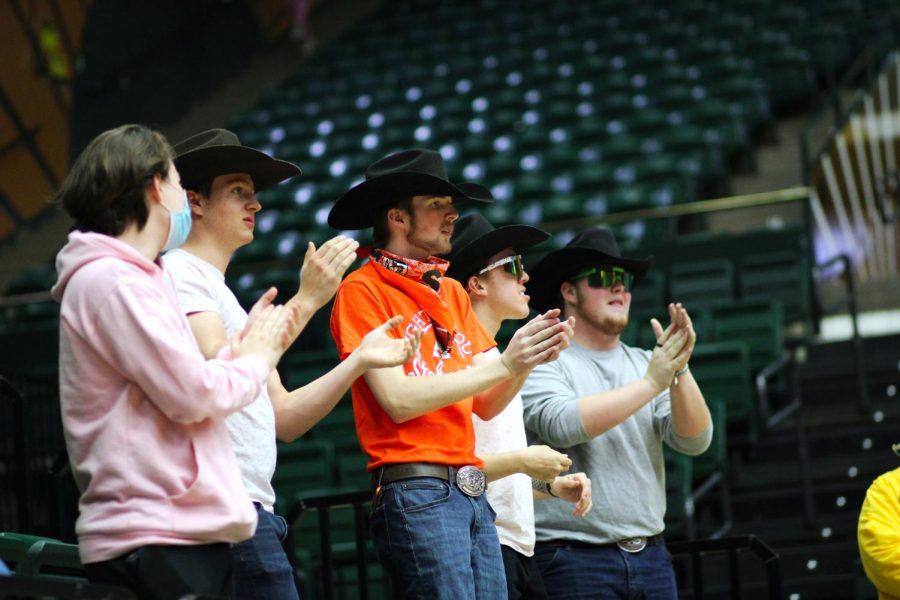 Colorado State University fans branded the Outlaws of Moby cheer on the women's basketball team Feb. 17. The Outlaws stood the entire game, supporting the Rams through their 56-45 win.

The Colorado State University men’s basketball team finished their regular season with a thrilling 71-68 victory over the Boise State University Broncos March 5. During the post-game press conference, Rams head coach Niko Medved sported a classic cowboy hat in honor of a group of Rams super fans who call themselves the Outlaws of Moby.

It all started when the group of seven freshmen students decided to coordinate their outfits for the Rams’ win against Saint Mary’s College of California. Initially, some sort of masks were the plan, but after a separate gathering for which they bought and wore cowboy hats, the Outlaws decided to run with the hats instead.

“We all had hats, and we went to the first game, and everyone was coming up to us like, ‘Wow, we love what you guys are doing; this is cool,’ and we ended up (repeatedly) doing it because the support was absolutely great,” said Dallas Fleck, a member of the Outlaws.

But it wasn’t just everyday fans and game-goers that were going up to the fan group to show their support. The group said some notable CSU alumni and staff showed their support early on. Names such as Erica Medved, wife of Niko Medved, CSU President Joyce McConnell and CSU Director of Athletics Joe Parker were all said to have shown their support to the Outlaws.

As the season progressed, the group said it became a commitment and responsibility to show up to every game, whether it be for the men’s or women’s basketball team. Sometimes that even meant waiting outside of Moby Arena for hours before tip-off to get the same student section seats for every game.

Toward the end of the regular season, the Outlaws came up with a dream soon to become reality: they wanted to make a trip to Las Vegas to support the Rams in their upcoming 2022 Mountain West Basketball Championship tournament. The only problem was that a four-day trip to Las Vegas for seven college freshmen is pricey. Their solution: a GoFundMe campaign.

“Within four hours, we were at about $700, and that’s when I just closed it, and I wasn’t looking at it,” said Anthony Barse, another Outlaw.

The original goal for the fundraiser was to raise $1,500 to finance the trip. Barse started the campaign on the morning of the Super Bowl.

Then, the Outlaws got the surprise of a lifetime. The night following the men’s team’s first run-in with Boise State, Niko Medved and Erica Medved helped out in a huge way for the group, donating $900 to surpass the fundraiser’s targeted amount.

“Erica (Medved) and I were sitting there; we looked, and I think they were $900 short at the time, … so we were like, ‘You know what, let’s do this for them. We’ll get them to their goal,’” Medved said. “It wasn’t a hard decision.”

Along with the donation, the Medveds left a simple message to the Outlaws that read, “Let’s Go! See you in Vegas!” Coach Medved later sent out a tweet in response to the GoFundMe that read, “We got you @OutlawsOfMoby ! You all make a difference! Medveds are ready to help! See you in Vegas ! #TeamTogether”

When the Outlaws became aware of what the Medveds had done for them, a burst of collective happiness coursed through the group.

“I stood up and screamed like a little girl,” Fleck said. Since the GoFundMe was started, the Outlaws have surpassed their goal by nearly $2,000, totaling $3,405 for their trip so far.

The Outlaws then started cementing their plans for the tournament trip. Four of them plan to drive in Fleck’s Dodge Dakota to Las Vegas on March 9, the day before the Rams play their first game in the men’s tournament. The other three will fly in on March 10 and join the group at the arena in time for the first game.

“It’s a really unique energy at these neutral court environments,” Medved said. “Looking up there and having the support system from your fans means the world.”

As the Rams’ season comes to a close, the Outlaws want to keep their momentum and rowdiness going in the future. They said they plan on branching out their fandom into other CSU sports, like football, soccer, volleyball and softball.

The No. 2 ranked Rams will begin their championship bid against the winner of No. 7 Utah State University and No. 10 United States Air Force Academy March 10.