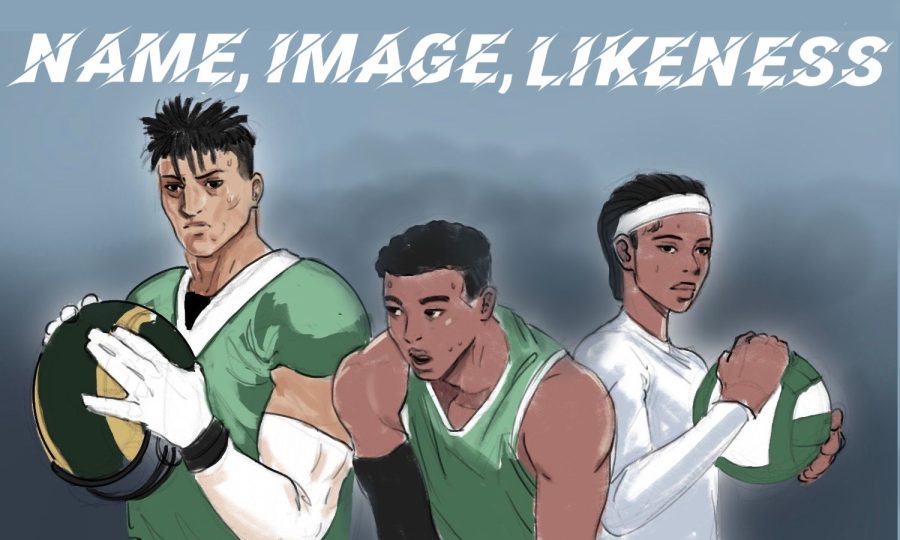 The debate on whether college athletes should receive financial compensation for their name, image and likeness is not a new one. However, despite lawsuits such as O’Bannon v. NCAA, little changed in the NCAA NIL rules until 2019, when states began to pass their own NIL laws that overrule the NCAA.

Pressured by these laws, the NCAA changed their NIL restrictions on July 1, 2021 — the same day new NIL laws went into effect in many states. College athletes can now make money off their personal brand for the first time in NCAA history. But what does it mean for Colorado State University and Fort Collins as a whole?
1. (Some) Rams will get paid

The NCAA’s new rules allow college athletes to profit off their personal brand and make money on everything from endorsement deals to training camps and event appearances.

This is obviously good news for student-athletes, though the impact will vary for different athletes. Athletes in less popular sports won’t have the same opportunities as the men’s basketball team, for example. Most NIL deals rely on an athlete’s recognizability, and athletes in the most followed sports will inherently have the best opportunities to make money.

Some Rams are already cashing in on their opportunities: CSU basketball star David Roddy has reportedly received compensation for appearing on DNVR podcasts, getting sponsored attire deals and even periodically co-hosting his own radio show, a section of radio host Brady Hull’s “The Hull Show” on 1310 KFKA, promoting everything from sponsored T-shirts to Krazy Karl’s Pizza.

Beyond personalized NIL deals, there are widespread opportunities businesses have created. As soon as NIL deals were allowed, Barstool Sports began signing thousands of student-athletes from a wide variety of sports and schools. MaximBet, a sports betting company, offered a NIL deal to every NCAA female athlete in Colorado as part of a promotion in late 2021.

While opportunities are going to differ from athlete to athlete, all CSU Rams now have the opportunity to receive compensation or free stuff for the usage of their personal brand.

Need to bring your company event to the next level? You can now hire an athlete to speak at your event.

Want to increase traffic at your store? There’s now the option of paying a Ram to host an autograph signing there.

Are you a small business trying to increase visibility? Complementary goods or services will likely get an athlete to promote your brand.

New NIL rules won’t only benefit athletes but local businesses as well. Supporting a small business is a good look for athletes, and compensation just boosts their desire to do so. Despite being a reasonably large city, Fort Collins is a college town at its core — local businesses partnering with local athletes is a positive for all parties involved.

3. Athletes will have new opportunities to give back to Fort Collins

New NIL opportunities don’t only give athletes the ability to profit for themselves but also the ability to make deals that can benefit camps, charities or whatever else the athlete chooses to focus on.

Ryan Stonehouse, a former punter for the CSU football team, discussed how he planned to use NIL opportunities, mentioning his plan “is to generate partnerships that benefit camps, and if personal partnerships come out of it, that’s great. I think a lot of college athletes should use that plan and follow it,” Stonehouse said.

These kinds of deals will benefit both athletes and the community. Camps, such as the ones held by Stonehouse, may begin to receive better equipment and more supplies, which improves the experience for local kids.

4. Despite concerns NIL markets may hurt recruiting, CSU will be just fine

One of the most common fears with new NIL rules has been recruiting could be affected, as large programs with nationwide recognition naturally come with more opportunities.

Realistically, though, it’s unlikely NIL considerations have affected recruiting at Colorado State, and even if they have, CSU certainly isn’t struggling to recruit.

Colorado State men’s basketball is quickly becoming a nationally recognized program, and the championship titles won by the CSU track and field team in the past few years speak for themselves. Programs such as these will be able to attract solid recruits without even considering NIL deals.

Even CSU football, which has struggled to find success recently, had a strong 2022 recruitment class under new head coach Jay Norvell. One recruit, Mekhi Fox, flipped his commitment from UCLA to CSU, despite also having offers from large market football programs such as the University of Florida and the University of Oregon.

It’s also important to recognize Colorado State, despite not being a Power Five school, still has an attractive portfolio. Fort Collins is a comparably large college town, having a larger population than well-known college towns such as Ann Arbor, Michigan, or Athens, Georgia. Fort Collins is a good market for college athletes, especially with its proximity to Denver.

5. Student-athletes will be able to jump-start their personal brand and practice important skills earlier

It’s no secret most college athletes will not continue on to become professionals. NIL deals allow athletes to practice important skills such as negotiating, marketing and public speaking before graduation. These skills are helpful for student-athletes down the road — either as a professional athlete or in a different career.

“It’s mostly just getting that experience, meeting new people and networking for later in life … and creating true relationships with people that can help down the line,” Roddy said.

Ultimately, it seems NIL partnership opportunities can benefit both individual athletes and the Fort Collins community as a whole.