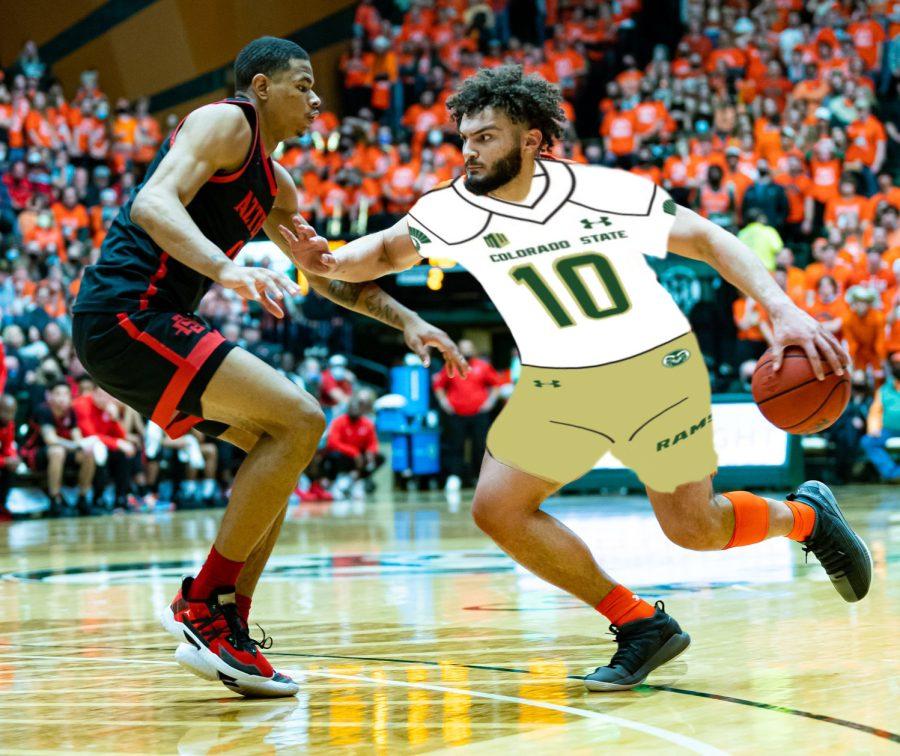 David "The Body" Roddy is looking at becoming the Football team's newest player.

Many know David Roddy as the 6-foot-6-inch power forward for the Colorado State University men’s basketball team who helped lead the Rams to a 25-6 overall record in this past 2021-22 season.

Now Ram fans get to see him in a pair of cleats, as the CSU football team and head coach Jay Norvell recruited the junior as starting quarterback to finish his college athletic career.

With the success Roddy has brought for the basketball program, it’s time for him to bring that same success to the football field.

Since Roddy joined the CSU Ramily in 2019, the Colorado State football team has gone 8-20, while the basketball team flipped their 2018-19 record of 12-20 to drastic success in Roddy’s debut collegiate season the next year with a 20-12 record.

Roddy had a big impact on bringing life back to Moby Arena and could do the same in Canvas Stadium, with the potential of sellout games like Moby witnessed this past season. Ram fans are yet to witness a winning season in Canvas since its 2017 grand opening season, which means Roddy has nothing to lose coming into the next football season.

Some Ram fans who have been following the CSU basketball team this past season have grown aware of Roddy’s past resume as a high school quarterback for Breck School in his hometown in Minnesota.

His senior year as QB, similar to the present, was filled with honorable mentions and awards, including being a finalist for Mr. Football in the state of Minnesota and Minnesota High School Football All-State Team.

Roddy finalized his high school football career with 20 touchdowns, 1,776 yards and only six interceptions; to compare, past CSU quarterback Todd Centeio finished the 2021 season with 10 interceptions, 15 touchdowns and 2,960 passing yards.

Although Roddy has been throwing down dunks instead of touchdowns in the last three years, it’s clear his raw athletic talent could bring just what the CSU football program is striving for: wins.

With the short era of Steve Addazio being over, it’s time for CSU football to get a fresh, likable face like Roddy to lead them to a winning season.

For any basketball fans worried about losing their star player, fear not: It gives room for athletes like Isaiah Stevens, Isaiah Rivera and John Tonje to emerge from the shadows and illuminate their abilities without Roddy.

The CSU football team will present their new QB in their first game away from Canvas against University of Michigan on Sept. 3. Roddy and Michigan ironically have a recent history that could fuel Roddy even more into starting the football season on a win.

In the 2021-22 CSU basketball season, the Rams made their way to the NCAA Division I Men’s Basketball Tournament, where their first-round matchup was against the anticipated underdog Wolverines. However, the Rams fell to Michigan 75-63, not knowing the two would meet again on the football field.

Now that the rivalry has been set, CSU has a light at the end of the tunnel and Canvas is awaiting sold-out games, fans can only wait for the Sept. 3 debut.

Reach Pirate of the Collegian Terrible Pete at sports@collegian.com or on Twitter @TayTayPau.