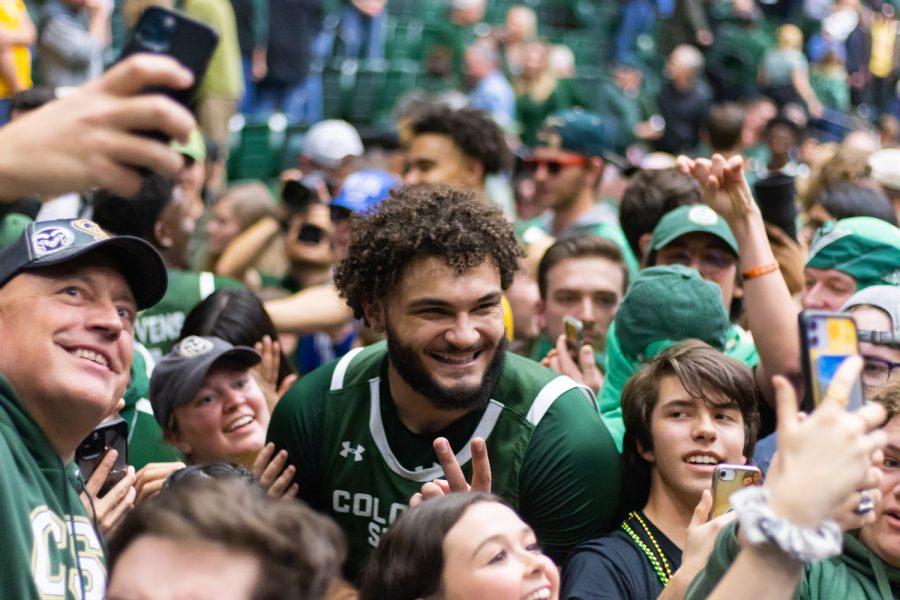 Colorado State University forward David Roddy (21) smiles for a photo while surrounded by fans after CSU's win against Boise State University March 5. Roddy led the Rams with 23 points in their three-point victory over the Broncos.

About five months ago, the Colorado State University men’s basketball team started their 2021-22 season with hopes of a great year. As fans look back, it was nothing short of that. The CSU Rams had a season filled with breaking school records, honors and awards, sold-out games and a taste of postseason play.

CSU started their season with an 11-game winning streak, which included being champions at the 2021 U.S. Virgin Islands Paradise Jam tournament, where they took down Bradley University, Creighton University and Northeastern University.

Powerhouse David Roddy came out of the Paradise Jam with a total of 93 points, earning him the tournament’s Most Valuable Player honor and giving fans a sneak peek of his abilities away from Moby Arena. The Rams also had the highest number of 3-pointers in the school and tournament’s history, with 20 made threes against Creighton.

The Rams then returned to Fort Collins, where they went 3-0. That included a 74-58 win over Saint Mary’s College of California, which added a good look for CSU come postseason.

Following their 9-0 record, the Rams had one of their biggest pre-conference games. They faced Mississippi State University in a neutral zone, also strengthening their season summary. Roddy became part of the 1,000-point club while snatching CSU’s 10th win of the season with a close 66-63 victory over MSU.

After a 23-day break following the MSU win, the Rams headed into their 18-game journey through the Mountain West Conference. After a quick win against the United States Air Force Academy — during which Isaiah Stevens became the second Ram this season to join the 1,000-point squad — CSU headed to their first away MW game.

Colorado State’s 11-game winning streak was broken in a shocking 79-49 loss against San Diego State University. But after the lowest-scoring game of the season, there was nowhere to go but forward.

The Rams had no problem moving on from the SDSU game, going 5-0 in their following conference games, taking three victories at home and overtaking San Jose State University and Air Force on the road.

Going 16-1 thus far, the Rams had their first sellout game of the season but obtained their second loss, falling to the University of Nevada, Las Vegas in a heartbreaking 88-74 final.

Three days later, CSU headed to the annual Border War in Laramie, Wyoming, where Cowboy Hunter Maldonado troubled CSU with his 35-point game. The Rams pushed the game into their first overtime extension but couldn’t hold a lead, losing 84-78 to the University of Wyoming. However, the Rams headed back to Fort Collins, where they hoped for revenge in a second sellout match against SDSU.

Moby Madness cheered CSU in a nail-biting 58-57 win against the Aztecs, which boosted the Rams’ confidence in continuing the season. Improvement showed with four more wins to CSU’s record, including a third Moby sellout against California State University, Fresno and an away overtime 77-74 win over future MW champions Boise State University.

Continuing their season in Las Vegas with a 21-3 record, CSU met their match, going 0-2 against UNLV with a 72-51 loss. The Rams had a chance to redeem themselves following the game drop, hosting part two of the Border War with yet another home sellout. Roddy dropped 26 points and 11 rebounds with help from fifth-year transfer Chandler Jacobs, who finished with 18 points and seven rebounds, getting the Rams a 61-55 win over UW.

The Rams’ final game of the season came on senior night and, for the first time in CSU’s MW era, was the last of five consecutive sold-out games. The game to wrap up the season was against Boise State, in which the three 1,000-point leaders all finished with double-digit points. The Rams took a 71-68 win, finishing the regular season 24-4.

Next on the Rams’ schedule was the 2022 Mountain West Men’s Basketball Championship. Roddy was named Mountain West Player of the Year just a few days before. Colorado State got a first-round bye, meeting Utah State in the quarterfinals, where the Rams scraped by with a 53-51 win.

The Rams then advanced to the semifinals, once again taking on SDSU, who gave CSU some issues earlier in the season. Both teams brought their best abilities to the court, but Colorado State fell in a close 63-58 match.

Despite the short run in the MW tournament, Selection Sunday for the NCAA Division I Men’s Basketball Tournament was the opposite, as the Rams waited to hear their name. CSU was seeded No. 6, the highest in the program’s history, facing off against No. 11 University of Michigan.

The Rams headed to Indianapolis, Indiana, for their first time at the Big Dance since 2013 and were the first game of the tournament. While CSU had a powerful first half, Michigan kicked it into gear coming into the second. Colorado State fell behind after a seven-point lead at half, concluding the game and their season with a 75-63 loss to U-M.

Junior Dischon Thomas led the Rams in their NCAA debut with 15 points, which included four of CSU’s eight 3-pointers at halftime. Although the Rams’ NCAA journey ran out faster than some were expecting, Roddy said he was proud of all the team achieved in his first three years here and had no hesitation on their drive for the next season.

“For us to do it and flip a team from 12-20 to 25-6 in about three or four years is very impressive,” Roddy said. “It was an amazing journey this season, and (I) couldn’t be more proud of this team and this program.”

While the Rams’ end of the season was abnormal to the majority of the whole season, the team had an unforgettable year, finishing with several new school records. Roddy and Stevens accounted for almost 20 different awards and honorable mentions, and head coach Niko Medved was named United States Basketball Writers Association District Coach of the Year.

The Rams seem to be on a steady incline to even more success and will be heading into the 2022-23 season with a new hunger and sight of being a stronger threat come postseason. Until then, Ram Nation will be patiently anticipating the building energy of next year’s squad.