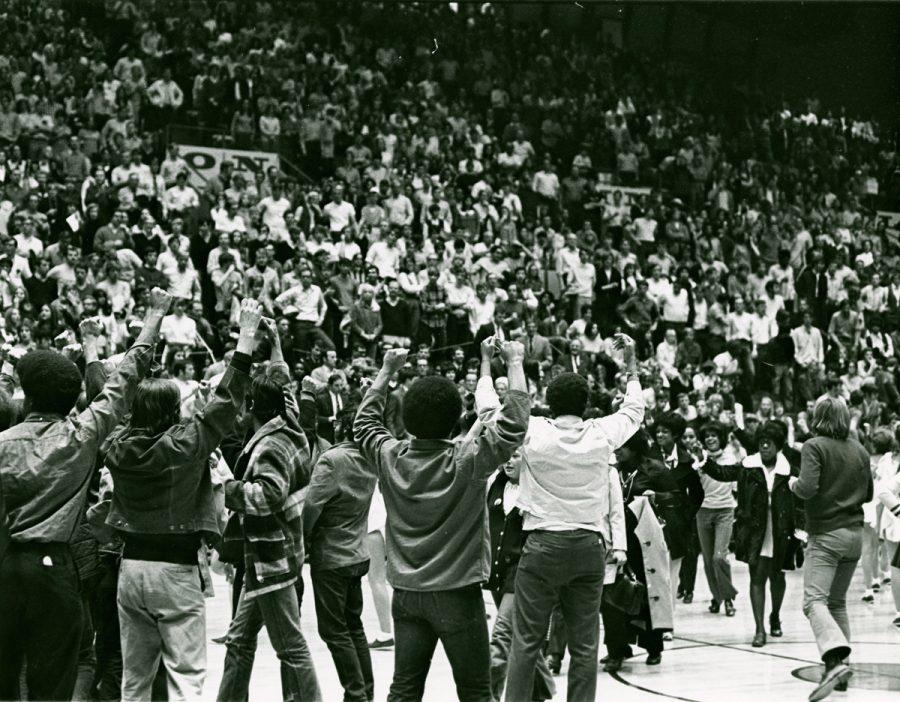 The crowd and police at the February 1970 demonstration against Brigham Young University in Moby Arena. (Photo courtesy of University Historic Photograph Collection)

What would you do to stand up for what you believe in? To what lengths would you be willing to go? Would you stand boldly in the face of authority to have your voice heard? Would you raise your voice, even if it resulted in condemnation from your peers?

These are questions that citizens, religious followers and journalists have had to ask themselves for as long as the government has existed in our world, with varying degrees of severity of consequences for doing so.

The First Amendment is the standard in the U.S. for the freedom of individuals to express themselves. It is the backbone of our democracy, and in 1970, on the Colorado State University campus, a group of students undoubtedly took those same questions into consideration when they found out the Brigham Young University basketball team would be in town to play the Rams.

It was Feb. 5, 1970, and the BYU Cougars made the trip to Fort Collins to take on their Western Athletic Conference rivals. However, the atmosphere in Moby Arena that day was palpably different than it had been in games past.

At halftime, students were packed into the gym, many of them holding hands, obstructing the way to the court. Students in the crowd held signs with various messages denouncing racism, as there had been a student demonstration before the game protesting the Church of Jesus Christ of Latter-day Saints’ policy of not allowing Black men to join the clergy. The game continued as planned.

Moments after the halftime buzzer sounded and the players made their way to the locker rooms, a group of students comprised of members from the Black Student Alliance, Associated Students of Colorado State University and other eclectic pockets of student support made their way to the center of the court with their fists raised in the trademark symbol of the Black Power movement.

As Matt Stephens reported for the Coloradoan in 2015, after students took the court, 20 Fort Collins police officers in full riot gear poured in to confront the student protesters. The protest was peaceful, then-ASCSU president Jim Starr told the Coloradoan; the students had done nothing but interrupt the BYU cheerleaders’ halftime routine, and the police were able to clear the court with little resistance and created a line around the court.

Then, a lit Molotov cocktail was thrown onto the floor of the gym. While it didn’t explode, as it was stomped out, that didn’t stop all hell from breaking loose in Moby. Students rushed the court as others in attendance stormed toward the doors, trying to escape the riot that was ensuing within the tight confines of Moby Arena. When the dust settled, seven CSU students were arrested, and the game came to its conclusion with CSU earning a 94-71 victory over the Cougars.

Events like this had become commonplace for the Cougars in this period in time. That same season, students at the University of Arizona set the free-throw line on fire before a game with BYU. Students at Oregon State University had surrounded the court in a game with BYU two years prior as well. All these protests were done in the same spirit of denouncing the LDS church policy of not allowing Black men into the priesthood.

This policy seemed to also stem toward the basketball team, as BYU fielded an all-white team at the time. The church repealed the policy in 1978 after Church President Spencer W. Kimball had a revelation from God that “all of our brethren who are worthy may receive the priesthood.”

The community’s response to the Moby riot was what you would expect from a population that was predominantly white: outrage. The front page of the Coloradoan the day after the riot read, “Blacks disrupt basketball game,” and student reporters for this very publication, The Rocky Mountain Collegian, in 1970 used a racial slur when referring to those involved.

It was a disproportionate and ignorant response when you consider that not only Black students were involved with the protest. The group was comprised of Black, white and Latino students alike. Not only that but all seven of the students who were arrested that day were white.

Starr told the Coloradoan that he believed the protest would have remained peaceful if the police hadn’t been involved. Fort Collins Police Services don’t have any record of the Feb. 5 events, according to the Coloradoan’s reporting.

This moment of Fort Collins and CSU history is not as well documented as it should’ve been, and the reporting of the era puts a spin on things that ultimately vilifies those who made the choice to use their voice — to stand up for what they believed was right.

As students now, we must work to remember the efforts of those who left a legacy of refusing to accept the status quo and using their voice to effect positive change, especially if there is unrighteous authority standing in your way.