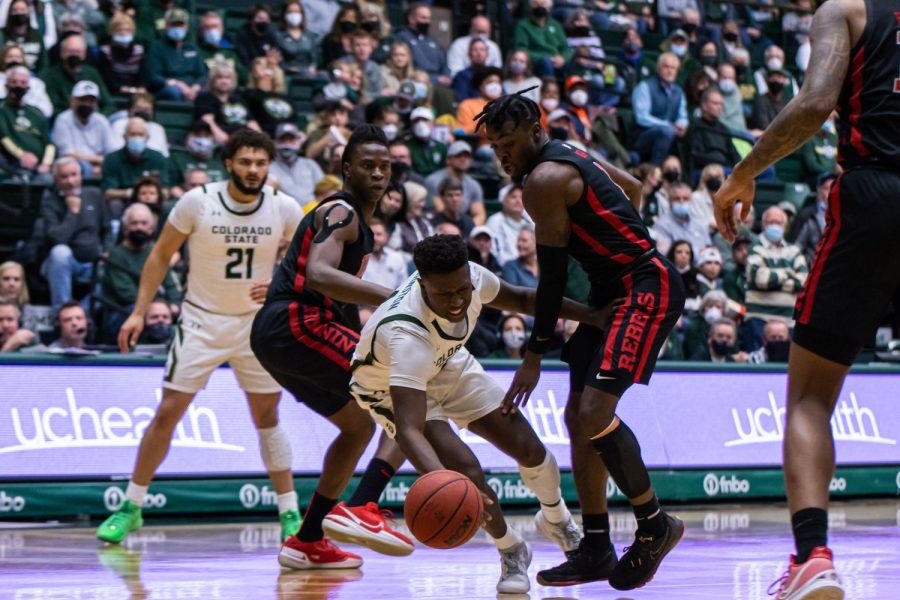 Isaiah Stevens (4) is fouled by a defender while driving towards the basket during the Colorado State home game vs the University of Nevada, Las Vegas Jan. 28. CSU lost 88-74.

The Colorado State University men’s basketball team stayed on the road and faced off against the University of Nevada, Las Vegas Rebels on Saturday, Feb. 19 in Las Vegas.

The Rams’ last meetup with the Rebels was Jan. 28 when they got their second loss of the season, falling 88-74 in Moby Arena. UNLV won tonight’s matchup 72-51.

The Rams started the game off hot around the arc while UNLV seemed to be successful down low in the paint. Both teams had a hard time finding a flow, with 12 minutes left in the first half and the teams tied at a low score of 10.

The Rams and Rebels continued to snatch defensive rebounds, turning them into point-making plays on the other side of the court. However, with six minutes left in the first, the Rams found themselves six points behind, trying to comeback before halftime, 21-15.

Regardless of the Rams’ effort to keep a close game, they fell short with inaccurate shots and trouble keeping hold of the ball. The Rams headed to their locker room at halftime down 35-24.

David Roddy ended the half with only seven points, while John Tonje led the Rams with eight. Despite the slow momentum in the first half, the green and gold have historically shown strong second-half play.

At the start of the second half, UNLV senior guard Bryce Hamilton was creating issues for the Rams, as he had a hot hand. Things continued to worsen for the Rams as they tried to find a way to bounce back but were down 46-28 with 15 minutes left in the game.

Roddy and Isaiah Stevens — who are normally big play makers and consistent point makers — were having a hard time getting in their normal mindsets. The game needed to be a team effort if the Rams wanted to come back.

With 7:16 left in the game, Colorado State didn’t give up, pushing for layups and transition baskets. However, UNLV came out ready to play as they hosted their fans, pushing the lead to 60-40.

Despite the Rams being 5-2 on the road before facing UNLV, tonight’s game wasn’t in favor of the squad, and they fell 72-51, becoming 21-4 overall.

Stevens finished the night leading the team with 14 points and three assists, while Roddy and Tonje were the only other Rams in doubles, with 11 and 10 points, respectively, to close the night.

The Rams will be back in Moby Arena Feb. 23 for round two against the No. 2-ranked University of Wyoming Cowboys for the whiteout game at 7 p.m.