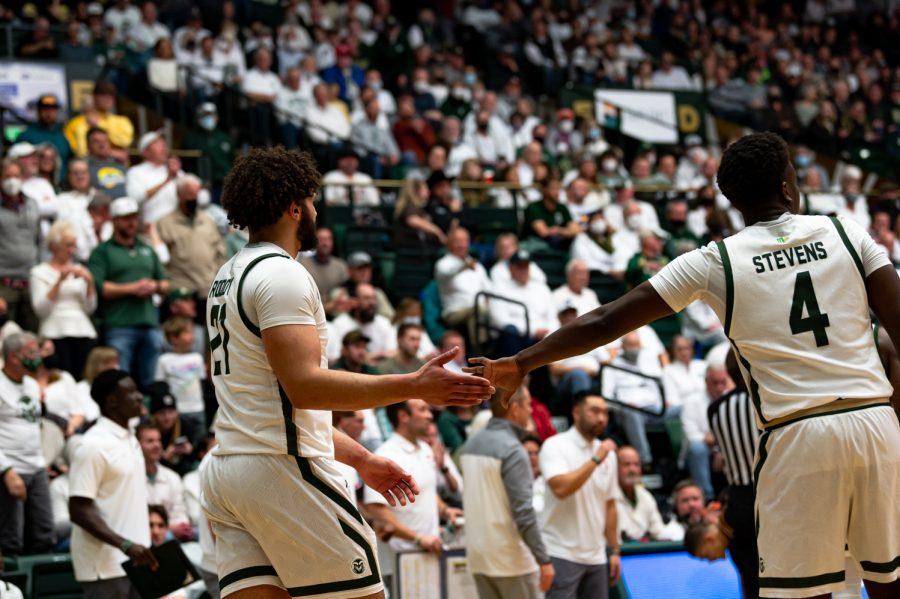 The battle with the Aggies started with high momentum from the Rams, with strong traps on the baseline and smart shots on the other side. Things got a little sloppy, as both teams had a hard time keeping hold of the ball, but CSU got an early 11-4 lead.

With Utah State being quick in the passing lanes on defense, the Rams were struggling to get into a consistent flow. However, the green and gold was able to keep Utah State’s star guard Justin Bean from getting into a rhythm, making him 0-3 with less than 10 minutes left in the half, Rams up 17-8.

In the last five minutes of the half, both teams seemed to be in a drought offensively, but the Rams continued to stay ahead and lock down shots. Heading into the locker room at the half, Utah State tried closing the gap but CSU finished on top, 30-24.

Within the first three minutes of the new half, the Rams’ small six-point lead turned into a back and forth lead change after the Aggies got their first lead of the game at 32-30. Utah State kept their stride throughout the half, making CSU work for their shots.

The Rams pulled great defensive play later on, creating blocks and receiving rebounds, but USU was determined to present an upset. David Roddy had only eight points with 8:32 left in the game but could rely on Kendle Moore, who was dialed in with 13.

With Moore getting a groove and Roddy following close behind, the Rams found themselves with a six-point lead with a little over seven minutes left in the game. With the foul count at 15 for Colorado State, they kept playing with high intensity while Utah stayed close on their tail.

Despite Moore averaging 5.5 points a game before USU, the nerves of the close match brought out a threat that helped lead the Rams to a 66-55 win, making CSU 13-4 in the Mountain West Conference. Moore finished the night with a personal-best 23 points and six rebounds, taking some of the weight off Roddy, who ended with 13 points and 10 rebounds.

The Rams will be wrapping up their regular season at home for green out and senior night as they host the Boise State University Broncos with a full-week break between games, playing March 5 at 6:30 p.m.