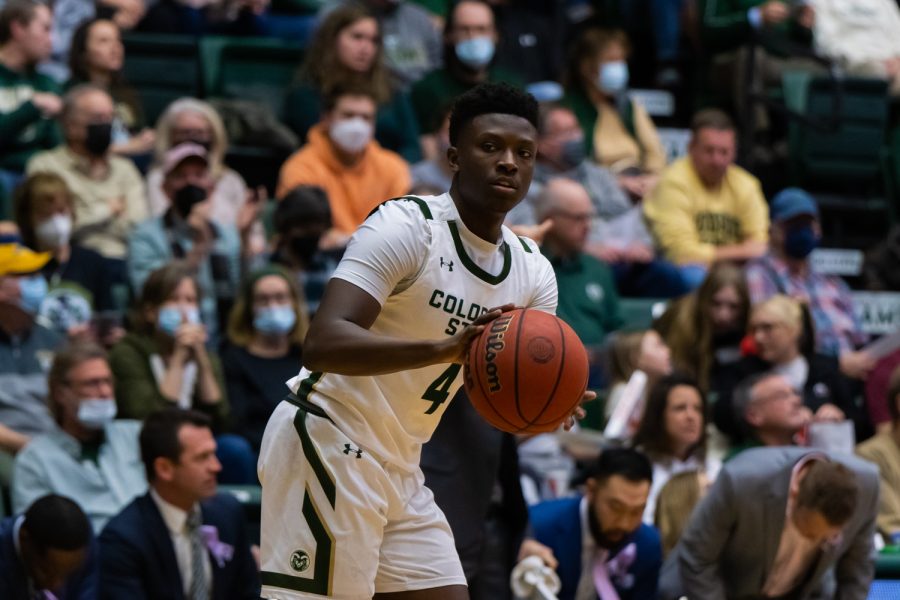 Isaiah Stevens (4) looks at his teammate after getting the ball inbounded to him as Colorado State University takes on the University of Nevada, Las Vegas at the sold-out game in Moby Arena Jan. 28. CSU lost 88-74.

The Colorado State University men’s basketball team is continuing to make school history. At 20-3 overall this season, the Rams have beaten their all-time best record through their first 23 games. In the driver’s seat of the team’s success is guard Isaiah Stevens, who leads the team in assists per game, steals per game, minutes per game and free-throw percentage this season.

Despite the success the team has seen so far, Stevens is just getting started.

The Allen, Texas, local started his basketball career young. At an early age, he was introduced to basketball by his family, whom he said have all played at some point in their lives. His introduction to higher-level basketball came thanks to his older brother, Barrington Stevens, who was a point guard for the University of South Alabama, a Division I program, from 2012-16.

“I was traveling the country as a 7- (or) 8-year-old, not really realizing what’s going on, but next thing you know, you’re walking into these big gyms with all these teams and college coaches lined up all around the court watching,” Isaiah Stevens said. “Eventually, over time it just kind of seeped in, like, ‘Man, I want to do something like this too.’”
“Everybody helped with the process. It’s definitely more of a team award. I know my name gets put on it, but I wouldn’t be able to be on that list without the rest of the Rams.” -Isaiah Stevens, CSU men’s basketball guard

The elder Stevens brother is now a professional basketball skills trainer whom Isaiah Stevens said he goes home to train with when he is not with his CSU team. When it comes to his success and playing at the level he is, Stevens said his older brother “is definitely someone who has helped a lot.”

“I wanted to be just like him growing up,” Isaiah Stevens said. “Just watching him chase his dreams, he was definitely someone that took me under his wing. … When I really started to get into basketball, he started training me.”

Now, as a junior at CSU, Stevens has risen to hoops stardom in the college basketball world. He was recently named to the watchlist for the Bob Cousy Award, which is awarded annually to the best collegiate point guard in the nation for that year. He is one of 10 on the watchlist, which will eventually be narrowed down to one winner toward the end of the season.

“I just feel like (the Bob Cousy Award) is a huge nod to the work that I’ve put in (and) my teammates around me,” Stevens said. “It’s definitely a big-time blessing.”

Before the season starts, a watchlist is posted for most individual awards, like the Bob Cousy Award. Stevens did not appear on the Cousy award list in October. In order to motivate himself to get up and get better every day, he said he set a screenshot of the watchlist as his phone’s lock screen — a constant reminder of the doubt he faced before the season.

“I just continued to work,” Stevens said. “Everybody helped with the process. It’s definitely more of a team award. I know my name gets put on it, but I wouldn’t be able to be on that list without the rest of the Rams.”

As far as goals for this season with the team go, Stevens is keeping it simple: He’s in it to win it. A short list of milestones he has in the back of his mind include “March Madness, conference tournament, conference championship and regular-season championship,” Stevens said.
“Many responsibilities come with being a leader, especially at a top basketball program.”
But it wasn’t always this way, according to Stevens. During his freshman year, the Rams were fresh off a 12-20 season and were looking for new life. Because of their lackluster previous season, Stevens said they hoped to be able to “catch some teams sleeping.” Then, just last year, Stevens and the Rams narrowly missed a chance to compete for a national championship in the NCAA tournament.

Now the Rams often have a target on their backs, boasting one of the best records in the country. For Stevens, one of the biggest improvements in his game that has and will continue to help the Rams do well this season is consistency.

“Just continuing to be more consistent everywhere, whether it’s shooting, passing, defense, communicating,” Stevens said. “I think just finding consistency in everything that I’m doing on a day-to-day basis will definitely be big.”

Developing consistency on all of these fronts is also helpful in being the best leader Stevens can be. As a guard for one of the top basketball programs in the country this year, he has naturally found himself in a role of leadership, where he has flourished since he arrived in Fort Collins.

“It’s something that me and coach (Niko) Medved have talked about since my freshman year, coming in and being a leader,” Stevens said. “I definitely take pride in helping lead this team.”

Many responsibilities come with being a leader, especially at a top basketball program. One of the top priorities for Stevens and Medved however, is communication on the court.

“Being able to have an open way of communication, not only with coach Medved but with the players too — … we all respect one another,” Stevens said. “Anything we may say, … it’s not anything taken personal; we’re just trying to help each other get better.”

What a joy it has been for Ram fans to watch a player like Stevens mature with a skilled team around him over the course of three seasons. As he gets closer to reaching his goals of winning titles this year, all that Ram fans can do is watch in awe as history continues to be made.