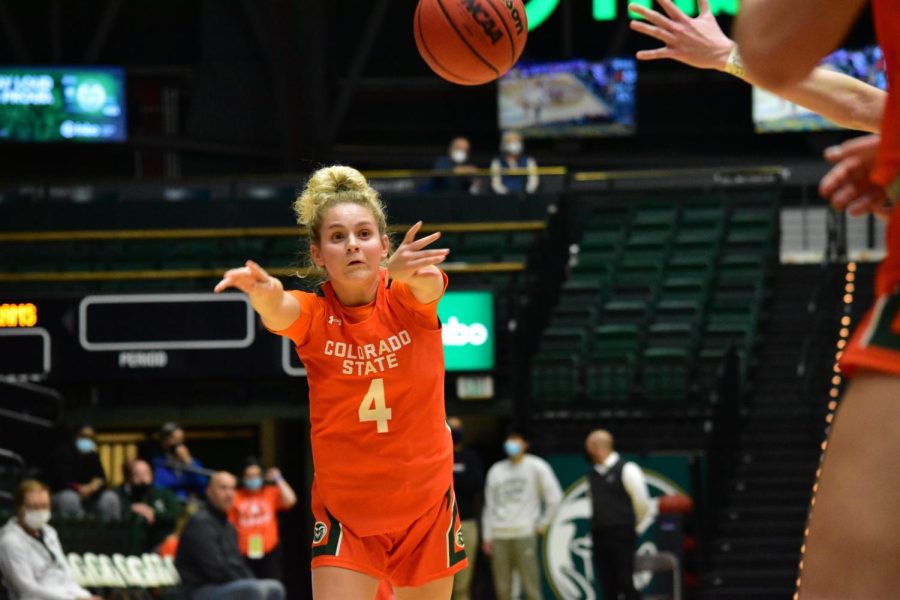 The Colorado State University women’s basketball team is hosting round one of the Border War against the University of Wyoming Cowgirls for their pink out game Feb. 17 at 6 p.m.

The Rams are currently 16-7 overall and 10-3 in Moby Arena, losing at home to the University of Louisville, the United States Air Force Academy and The University of New Mexico earlier in the season.

Although the Cowgirls are 12-10 overall, they sit one spot ahead of CSU in the Mountain West Conference standings with an 8-5 conference record. CSU has a 7-6 conference record, making Thursday’s game a crucial moment in the season for the green and gold.
“CSU will need their strong shooters to be consistent in order to take on the Cowgirls’ big defense.”
Colorado State has the third best offense in the MW, averaging 7.7 3-pointers per game, which will be monumental against Wyoming’s No. 2 defense.

The Rams will look to 5-foot-5-inch junior McKenna Hofschild, who leads her team in points, averaging 16.6 per game. Along with the threat of Hofschild are 3-point shooting duo Upe Atosu and Kendyll Kinzer.

Atosu and Kinzer are tied, both sitting with 46 made threes as well as an almost 40% 3-pointer average. CSU will need their strong shooters to be consistent in order to take on the Cowgirls’ big defense.

As far as Wyoming goes, the Rams defense will have to watch 5-foot-11-inch junior McKinley Bradshaw, who’s averaging 16.4 points a game in conference play. Bradshaw will also be a defensive menace with 50 conference defensive rebounds, just six behind the two 6-foot-plus leaders for Wyoming.

Making shots and having a fluid offense will have to be part of the Rams’ game plan going into their first meeting with Wyoming this season, along with shutting down key players inside the arc.

Get tickets now, and show up Thursday night dressed in pink for the women’s basketball Border War in Moby Arena for the third to last home game of the season.