The Rams close in on the Mountain West Championship. 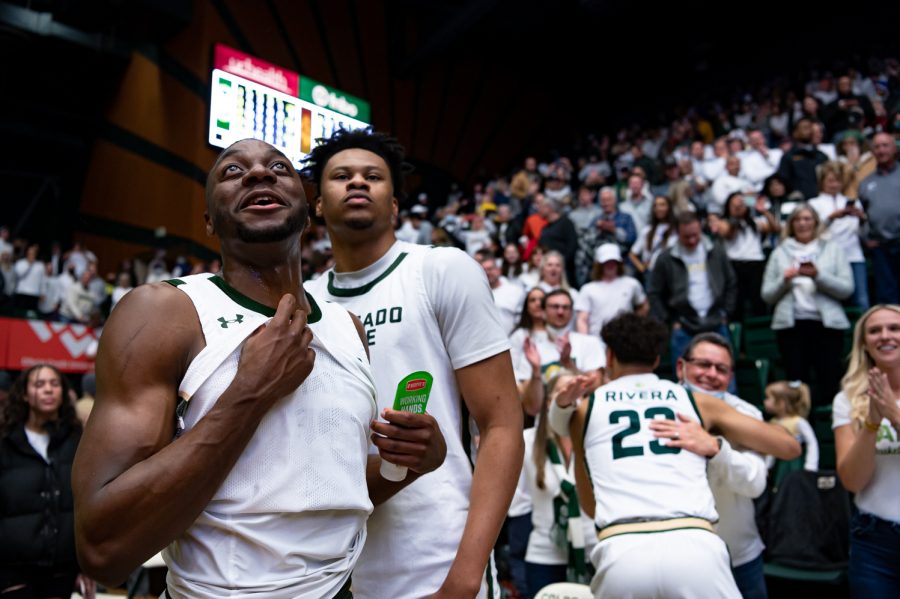 Chandler Jacobs (13) and Dischon Thomas (11) celebrate together after the CSU basketball game versus the University of Wyoming at Moby Arena Feb. 23. CSU won 61-55.

The Colorado State University men’s basketball team hosted the University of Wyoming tonight for part two of the Border War. With the fourth straight sellout of the season and fans dressed in white, the top two and three rankees in the Mountain West Conference were scheduled to have quite the game.

Once tipoff hit, David Roddy made it known that he was ready to play by winning the tipoff and scoring nine of CSU’s first 11 points, taking an early lead, 11-2.

Colorado State’s defense played a huge role in the first half; the Rams held the Cowboys to only 10 points in the first nine minutes of the game — along with effective rebounds that turned into point-making plays for CSU.

Outside quick-pass threes from Cowboy Xavier DuSell started to be an issue for the Rams, as their strong lead was shortened with less than nine minutes in the half, 19-15.

The Rams would have been a lot more comfortable heading into the half, but while their shots were on target, there seemed to be something covering the bottom of the basket. Wyoming tied the game at 21 shortly before halftime, but after an eventful last few seconds, Roddy kept the lead going into the locker room, 31-27.

The second half picked up right where the first left off, with Wyoming being a threat around the arc and CSU striving to keep their lead with second-chance shots. Soon into the second half, the Cowboys tied the game once again at 35, but Roddy wasn’t going to let that slide, pushing the Rams lead with a step-back three, 41-37.

The Rams were gaining momentum with just under 10 minutes left in the game as ball movement and dishes down low kept them with a six-point lead. With smart shots and crisp passes, the Rams continued to control the pace of the game.

However, it came down in Rams style: coming down to the final seconds of the game. With two minutes left in the Border War, the Rams had a six-point lead and never looked back, taking revenge on the Cowboys with a huge conference win, 61-55.

Roddy led the Rams to victory with 26 points, 11 rebounds and three steals, followed by Chandler Jacobs with 18 points and Isaiah Stevens with 10. The Rams are now 22-4 heading into their final away game of the regular season to face Utah State University on Feb. 26 in Logan, Utah.