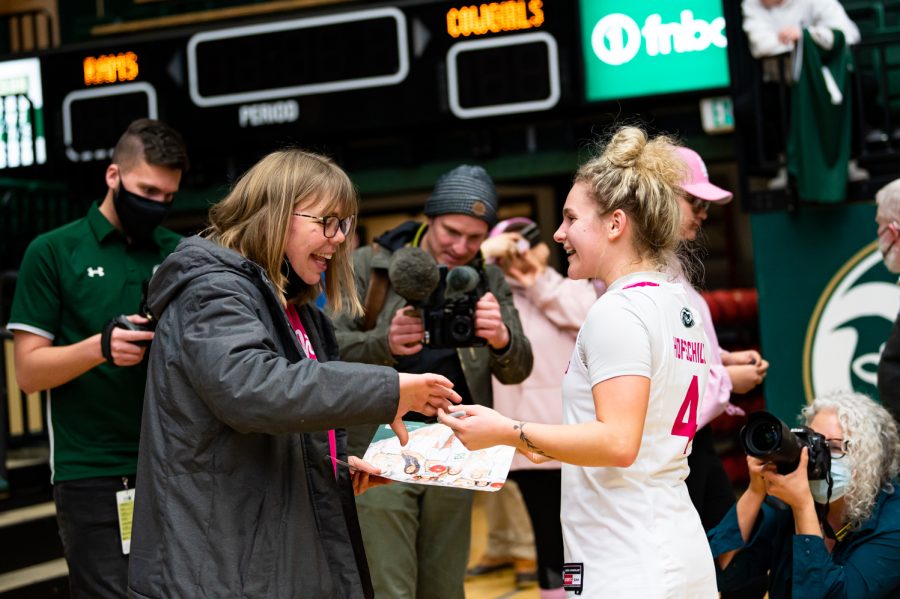 McKenna Hofschild (4) shares a moment with a fan after the Colorado State basketball game versus University of Wyoming Feb. 17. CSU won 56-45.

The Colorado State University women’s basketball team had an incredible game against the University of Nevada, Reno this weekend, proving once again that they are ready for the 2022 Mountain West Women’s Basketball Championship. While this was predicted to be a special game for the Nevada Wolf Pack, celebrating senior night, they came onto the court a bit sluggish. The Rams took a 12-point lead after the first quarter, bringing the game score to 20-8 right from the jump.

The Wolf Pack brought their drive back during the second quarter, turning the 15-point deficit in the middle of the quarter to a seven-point deficit by the end, closing the Rams’ lead and bringing the score to 30-23 by halftime.

While the Rams played with exceptional offense during the first half, they slowly fell short of maintaining such a dramatic lead during the second half. Even though they started the third quarter with a nearly 10-point lead, the Wolf Pack nearly caught up — just three points away from Colorado State. The Wolf Pack ended the third quarter with a 46-43 score against the Rams.

Some players who made excellent shots during the first half lost their grip with the ball during the second half. This allowed the Wolf Pack to have a slight lead during the fourth quarter. While the Rams seemed to be getting tired, they maintained their composure after the Wolf Pack tried to take their lead.

Colorado State got their grip back with the ball and took back their three-point lead with less than two minutes remaining in the fourth quarter. In the final seconds of the game, the Wolf Pack fell short of the win, and the Rams held tight to their leading score. Colorado State won 62-55.

Some of the key CSU standout players during tonight’s game against the Nevada Wolf Pack were McKenna Hofschild (4), Upe Atosu (5) and Kendyll Kinzer (0). Hofshild has had a record of incredible endurance as well as leadership on the court, which she did not fall short of in tonight’s game. Atosu not only is an excellent shooter on offense but played strong defense in tonight’s game. Kinzer was a star player in tonight’s game with her series of successful 3-point shots when passed the ball throughout the game.