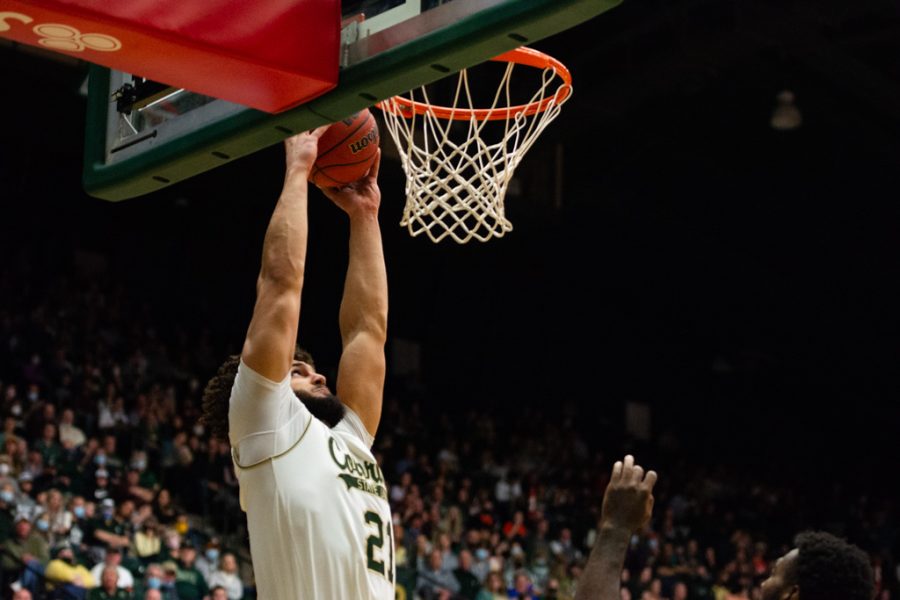 The Colorado State University men’s basketball team took to the court once again in Moby Arena on Feb. 11 to take on California State University, Fresno. The Rams went into the game 18-3 overall and 8-3 in the Mountain West Conference, and ultimately came out on top with a 65-50 win.

Their only regular-season matchup, the two teams came ready to battle for the win. Colorado State and Fresno State had a close call in the first half, but the Rams pulled through with 40 points in the second half.

Everyone was ready for some Friday night basketball and the Rams delivered with their high energy and quick game decision. Moby Arena has lately been selling out games or nearly reaching capacity, hosting 8,083 fans in attendance last night.

In the first half, Colorado state started off strong as junior forward Dischon Thomas secured his first 3-pointer of the night less than two minutes into the matchup. Thomas’ quick 3-pointer started the lead for Colorado State but not for long. The Bulldogs managed to tie the game, 15-15.

Once the Bulldogs managed to reach a tie, they took the lead, making the Rams fight for it. In a game of back-and-forth, Isaiah Stevens found himself at the free-throw line with less than a minute in the first half. Despite the pressure, Stevens secured both free throws and led the Rams into the second half down 28-25 against the Bulldogs.

In the second half, Colorado State knew it was time to get their heads in the game and bring home the win. Only two minutes into the half, junior guard John Tonje sunk a 3-pointer to take back the lead. At 35-30, Colorado State had taken the lead for good. Fresno State attempted to cut the advantage to one on two occasions, but the Rams wouldn’t give it up and won 65-50.

The Rams are currently ranked third in the Mountain West Conference standings, falling behind the University of Wyoming and the Rams’ next opponent, Boise State University.

The Colorado State men’s basketball team will hit the road on Feb. 13 to battle Boise State University in Boise, Idaho. The matchup will take place at 2 p.m. and will be broadcasted on Fox Sports 1 and Power 102.9.