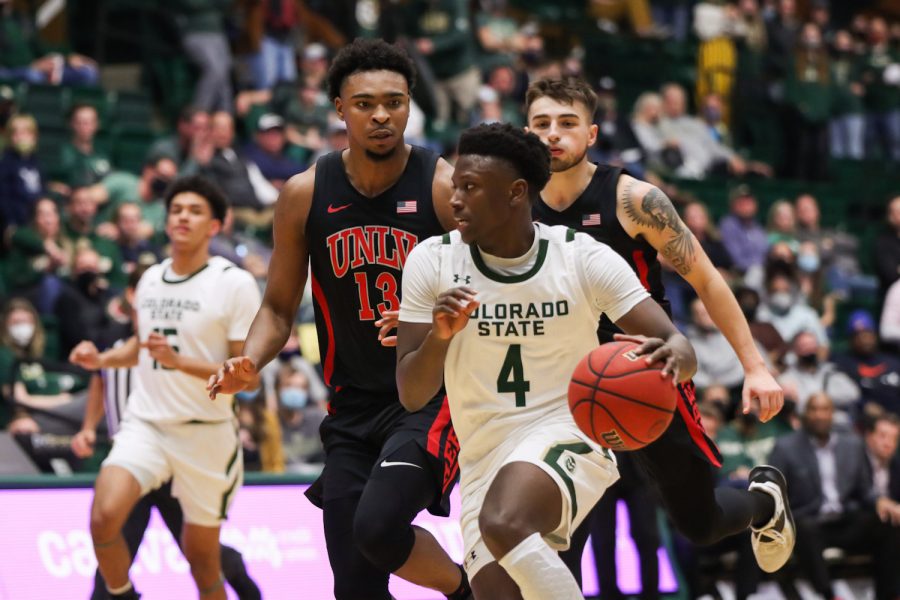 Isaiah Stevens (4) looks back at a defender as he drives toward the basket, during the Colorado State University men's basketball game vs. the University of Nevada, Las Vegas Jan. 28. The Rams lost 88-74.

The Rebels went into the game 11-9 and eighth in the Mountain West Conference, while the Rams were 16-1 and second in the MW. However, standings didn’t matter, as the Rams fell for the second time this season, 88-74.

Following tip-off, it took almost three minutes for one of the teams to add to the scoreboard, which ended up being the Rebels adding a three. Through the first half, the Rams struggled to stay on the ball and gain a lead.

The Rebels seemed to be building momentum as their shots were falling, but the Rams were building frustration, as their defense wasn’t holding up. The Rams were behind for the biggest gap in their season, closing the half 43-25.

Getting into the second half, the Rams still had a hard time getting points on the board, besides a few free throws from Isaiah Stevens and a huge three from Dischon Thomas.

The Rams only seemed to catch a break when referees blew the whistle as they tried to climb back with free throws. UNLV came to win and create an upset as the inevitable seemed to be getting closer with the game clock running down and the Rams falling behind.

At the end of the night, the Rams met their match: the Rebels gave CSU their second loss of the season, 88-74.

The Rams allowed Bryce Hamilton from the Rebels 45 points, seven rebounds and five assists. However, despite the loss, Stevens left Moby with 35 points, eight rebounds and two assists.

The Rams will head north for their next game as they play the University of Wyoming for the annual Border War Jan. 31 at 6 p.m.