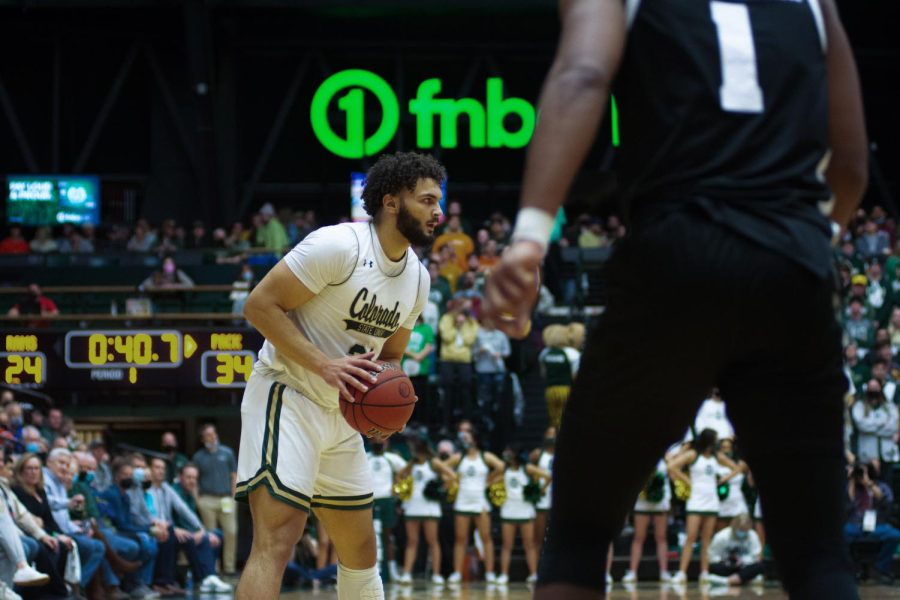 David Roddy (21) looks to pass the ball on offense during a game against the University of Nevada, Reno Wolf Pack. The Colorado State University Rams won 77-66.

Colorado State University’s men’s basketball team took to the court once again in Moby Arena Jan. 25 to take on the University of Nevada, Reno Wolf Pack. The Rams went into the game 15-1 overall and 5-1 in the Mountain West Conference, and they came out on top with a 77-66 win.

The Rams started off the game on a rough side, allowing two threes and a turnover within the first two minutes of the game. But the crowd reassured the team as Dischon Thomas got the Rams on the board with a deep three.

David Roddy wanted some action early on when he slammed it down for a dunk, followed by the student sections chanting his name with still over 16 minutes left in the first half.

CSU was having a tough time getting into a rhythm with shots not falling and a lack of offensive rebounds until Jalen Lake shot a corner three, missed, then James Moors snatched the rebound and dished it to Roddy in the paint for his second dunk of the game, Rams down 11-10.

Head coach Niko Medved called a needed timeout with 11:19 left in the first half. The Rams were falling behind on defensive possessions, and they were stuck behind the Wolf Pack by six points.

The University of Nevada pulled out a full-court press offense with over eight minutes left in the half. They were still ahead 23-14, but the Rams tried cutting that distance as sophomore Isaiah Rivera drained a three, making it 23-17 Nevada.

The game seemed to be at a standstill with neither team adding much excitement to the crowd until CSU’s Isaiah Stevens had a quick crossover and step back for a solid jumper, trying to get the Rams ahead with just over four minutes left in the half, 27-22 Nevada.

With 39 seconds left in the half, Roddy got the crowd on its feet once again with a splash of a three, making it 34-27 Nevada. No one scored again in the remainder of the half.

Back on the court for the second half, the Rams got into the basket first with a jumper from Kendle Moore, making it 34-29.

The Rams finally got in a groove, forcing Nevada to take a timeout after the green and gold outscored the Wolf Pack 10-5 in the first two minutes of the second, making it a two-point game, 39-37.

After almost creating a turnover, Moore slid down the court on his back and passed the ball to Chandler Jacobs, who made a second-chance layup, getting the Rams to tie at 39.

With both teams going back and forth, Stevens finally got the lead the Rams wanted with two made free throws for a 43-41 score with 14:35 remaining on the clock.

One possession later, Stevens said he wasn’t done when he turned a corner — breaking a Wolf Pack player’s ankles — and drained a three, 46-43 Rams. Stevens must have eaten his breakfast because about four minutes later, he decided to shake and bake to score in Nevada’s face, making it 52-51 Rams with just over 10 minutes left.

The Rams and Wolf Pack tied eight times in the second half, and no one could keep a lead until Moors made a free throw to gain the lead, and the Rams never looked back. The Rams worked for it, and they got the win at 77-66 and are now 16-1 overall and 6-1 in the MW.

Roddy ended the night with 18 points and went 5-5 from the free-throw line. Stevens followed close behind, ending with 16 points, and Jacobs with 14.

The Rams will return to Moby Arena Jan. 28 at 7 p.m. to face the University of Nevada, Las Vegas for the first time this season.