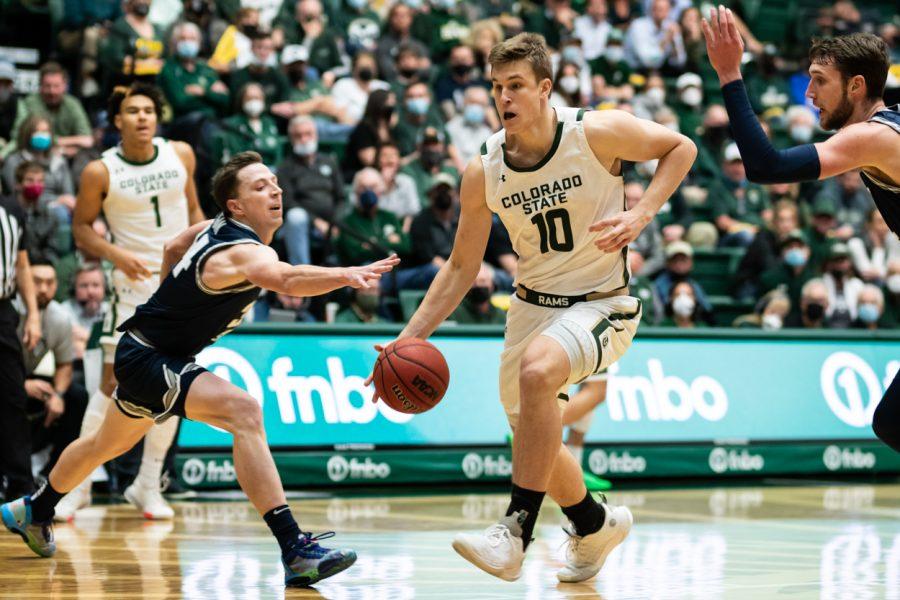 The Colorado State University men’s basketball team is in the midst of conference play in the Mountain West Conference. This Saturday, the team will head to the United States Air Force Academy at noon to take on the Air Force Falcons.

The Falcons are currently 8-7 after heading to Idaho to take on Boise State University this past Tuesday. The Air Force team is 1-3 in the Mountain West after having some conference games postponed due to COVID-19 issues, similar to what CSU experienced over winter break.

Over the break, one of those Air Force losses came as a win for the Rams, who won 67-59 Jan. 4. In the two teams’ last matchup two weeks ago, the Rams came out with a .737 average from the free-throw line compared to the Falcons’ .500. CSU has had success this season from the foul line, and while the team’s last game with the Falcons was a close one, this skill could become crucial for the Rams toward the end of the game this Saturday.

The Rams were coming off a 24-day break before hosting the Falcons, and the Rams are 8-0 at home, so the win was expected from CSU fans.
“If the Rams stick with the momentum they’ve had all season, they shouldn’t have a problem handling the standouts from the Air Force team.”
Colorado State’s current 13-1 overall record could be favored since the Rams are 5-1 away from Moby Arena but slipped up in California when they got their first loss to San Diego State University four days after their matchup with the Falcons.

The lack of green and gold in the stands could be an issue for the Rams, as crowd energy can be a big help for home teams. However, with the squad CSU has to compete with, the Falcons can assume adding a loss to their record. While any player with CSU on their jersey who hits the court makes a positive difference, the starting lineup is quite a threat to their opponents.

To name a few, David Roddy, Isaiah Stevens and John Tonje have made a mark on the program this season, with juniors Roddy and Stevens entering the elite club of having over 1,000 career points. Stevens passed the 1,000-point mark in the last Air Force game, as he scored 15 points that night with Roddy following behind him at 13.

This Saturday, the Falcons will have to come out of the gates fast if they want a chance against the powerhouse CSU has become this season. However, the Rams will have to watch out for freshman Ethan Taylor, as he dropped 19 points against CSU in the last game, along with senior guard A.J. Walker, who is also part of the 1,000 career points club.

If the Rams stick with the momentum they’ve had all season, they shouldn’t have a problem handling the standouts from the Air Force team.

Ram fans can travel to the Air Force Academy this Saturday for Colorado State’s next game or wait until Jan. 25, when the team stays in Fort Collins to host the University of Nevada, Reno at 7 p.m.

Editor’s Note: This story was updated Jan. 19 to reflect the changed time of the University of Nevada, Reno game.