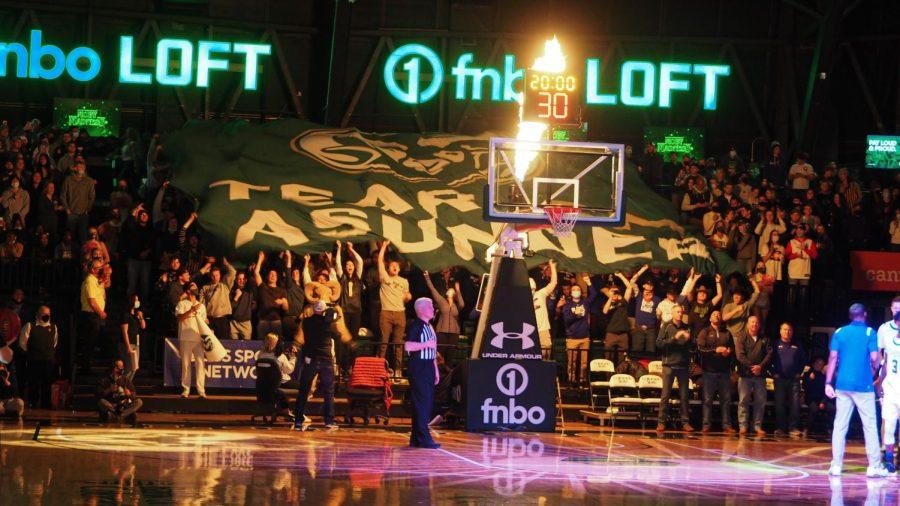 Though the second day of the spring semester was canceled halfway through the day at Colorado State University due to intense winter weather conditions, the CSU men’s basketball team (14 wins, 1 loss) showed up in Moby Arena tonight to take on the University of New Mexico Lobos (7-11).

The theme was ‘State Pride’ for tonight’s matchup, and the Rams came out with their deep blue warmups on, and the student sections filled to the max for the first game back from winter break.

The Rams started a little rocky after tipoff with the Lobos’ first points coming from a fast-break layup followed by David Roddy getting CSU on the board with a free throw at the opposite end. However, Dischon Thomas got the Rams to a tie with a nice three, 4-4.

With just over 15 minutes left in the first half, a much needed timeout was called by the Rams. They got a breather, as it seemed they needed a moment to gather themselves. The Rams accounted for two turnovers thus far while the Lobos came off the bus ready to play and doubled the Rams for points, 6-12.

Fresh off the bench, Jalen Lake got himself on the board early with a quick fast-break layup assisted by Isaiah Stevens to try to get momentum for the Colorado team.

Stevens kept up the energy with a few floaters, keeping the Rams lead at 19-18. Stevens wasn’t the only one trying to take it into the paint; Isaiah Rivera pushed through the defense and got himself on the free throw line to make 1-1, keeping the Rams up 26-21.

With just under four minutes left in the half, CSU stayed strong and tried to get to the basket. Roddy added another layup, leading the Rams in points with nine.
“Tonje added some spice with a dunk soon after, maintaining the Rams’ momentum.”
Lobo Jaelen House tried silencing the crowd with a deep three, but Stevens took control in the next possession, holding the ball as long as he could. With the clock ticking down for the half, Stevens threw it right to John Tonje, who was wide open in the corner and whirl-pooled the perfect three, keeping the Rams’ lead at the half, 37-32.

Coming out after halftime Roddy still led the Rams in points at 10 closely followed by Tonje with eight. Roddy and Stevens were both tied at 3 for assists while Chandler Jacobs led in rebounds with a total of five.

The Rams looked warmed up to start the second half as they seemed ahead on defense and powerful on the other side of the court. Thomas woke up the crowd, throwing up two shots that were split by a layup from Adam Thistlewood, getting the Rams up 46-36.

K.J. Jenkins from the Lobos tried closing the gap after getting fouled by Stevens on a 3-pointer, making it 46-43 with 14:37 to go. The Lobos soon got the lead they wanted with a jumper from Jamal Mashburn, making it 49-48.

Lake got the Rams to a tie at 52 with a floater that was followed by a shot clock violation on the Lobos. The Rams took advantage of the next possession as Roddy powered through two bigs to get a strong layup and the lead, 54-52.

Both teams stayed within several points of each other as Roddy drained a three from the left side to keep the lead 65-61. It was shortly followed by a basket from Stevens with just over five minutes left in the game.

With the fans louder than ever, Roddy dished it to Stevens, who was wide open right under the net and scored, pushing the lead to 73-66 with 2:18 left in the game. Tonje added some spice with a dunk soon after, maintaining the Rams’ momentum.

The Rams finished out the game at the free throw line, which isn’t foreign to CSU. They finished the last 45 seconds of the game 5-1 at the line from Lake, Jacobs and Roddy. They cut it close but came out with a win against the Lobos, 80-74.

With a new student attendance record of 3,844, the Rams put on a show and will have their next opportunity to hit the court when they travel to the United States Air Force Academy this Saturday at noon.