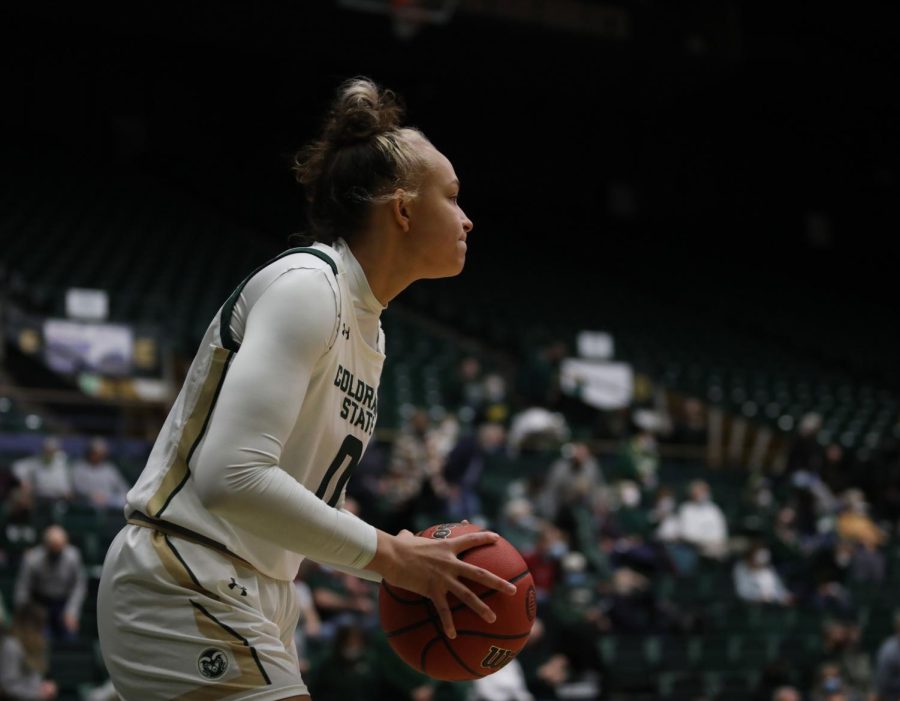 Kendyll Kinzer (0), Colorado State University forward, looks for a teammate to make an inbound pass to during the Rams' game against the United States Air Force Academy Jan. 13 The Rams lost to Air Force 52-77.

The team leader, McKenna Hofschild, had 17 assists last game. This game seemed to be no different, except she wanted to be the scorer this time. Hofschild took the lead and ended the game with 11 points and four assists.

The game might not have begun the way the Rams wanted: Boise decided to take the early lead and hold onto it in the first quarter. After Boise had their run, though, the Rams showed off their determination and had their own run and tied the game before going into the half, 35-35.

Teams break from the deadlock.

Both teams showed amazing defense and made every player earn their shots. It was an intense battle for the finish between Colorado State and Boise State.

This matchup was a close one as the fourth quarter became a nail-biter and the game became tied with less than a minute left. There were many chances the Rams had to pull through and get the lead, but the pressure Boise had seemed to be tough. Boise State pulled through with a layup and a foul. The game ended with the Rams at 64 and Boise State Broncos at 69, changing Colorado State’s conference record to 3-4.

The paint scorer, Karly Murphy, continued to bully anyone who attempted to guard her and was the leading scorer going into the half. Murphy recently has been the go-to player the team has relied a lot upon to put points on the board. Murphy ended with a 50% field goal percentage and 14 points.

The shutdown defensive player, Kendyll Kinzer, seemed a bit allergic to scoring but made an appearance on defense rebounding, blocking and stealing. This got her a ton of minutes on the court. Kinzer ended with 10 rebounds, two blocks and two steals.

Finally, CSU’s dead-eye shooter, Upe Atosu, was the lead scorer with 16 points and made two out of five 3-pointers. She looked to be all over the court and right where she needed to be.

After this loss against Boise State, the Colorado State Rams will reflect and come back ready for the Bulldogs at California State University, Fresno on Monday, Jan. 24.