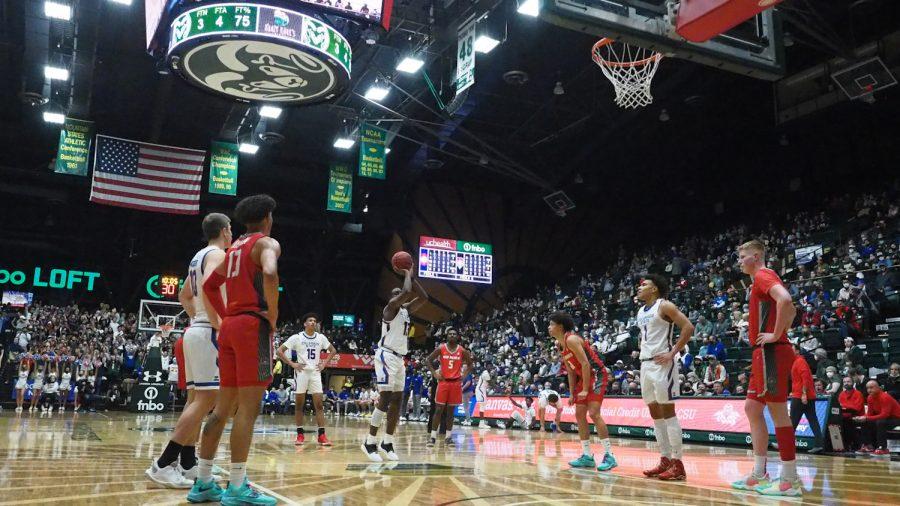 Before playing CSU, the Falcons were 9-7 after battling the University of Nevada, Las Vegas Jan. 20 with a close win of 69-62. After having some conference games postponed due to COVID-19 concerns, the Air Force team was 2-3 in the Mountain West. The Rams had a 14-1 overall season so far with a 4-1 conference record and were ranked fourth in the Mountain West.

The Rams were expected to show out against the Falcons because of their previous matchup Jan. 4, when Colorado State took home their first Mountain West win against Air Force 67-59.

As the game unfolded, the Falcons started off with Ethan Taylor taking his first jumper and putting Air Force on the scoreboard. This lead was short-lived as the Rams scored the following five points, taking the lead through the work of Kendle Moore, David Roddy and Chandler Jacobs. As the Rams began to work together and get into a rhythm, they pushed the lead further, nearly doubling the score and finishing the first half 31-17.

In the second half, the Falcons came out ready to put up a fight against the Colorado State Rams. Only five minutes into the half, Colorado State and Air Force scored back-to-back nine points each. Despite the Falcons’ efforts, the win seemed nearly impossible with the power seen from “Big Body Roddy” in the paint as he lead the board with the most rebounds. The Rams continued elevating their lead by dominating the paint, pulling fouls and holding the Falcons defensively.

The matchup was in the hands of the Rams. Working together diligently, Colorado State came out determined to get the win and finished the matchup against the Air Force Falcons with a 20-point lead of 73-53 .

Always good to win on the road in the league! Best 16-game record in history (15-1)! See you Tuesday at 7 in Moby!#TeamTogether x #CSURams@FortCollinsDCJH pic.twitter.com/AGKIAmGp6P

The Colorado State Rams are now 15-1 this season and added another win to the Mountain West Conference, 5-1. They will return to Moby Arena Jan. 25 to take on the University of Nevada, Reno at 7 p.m.