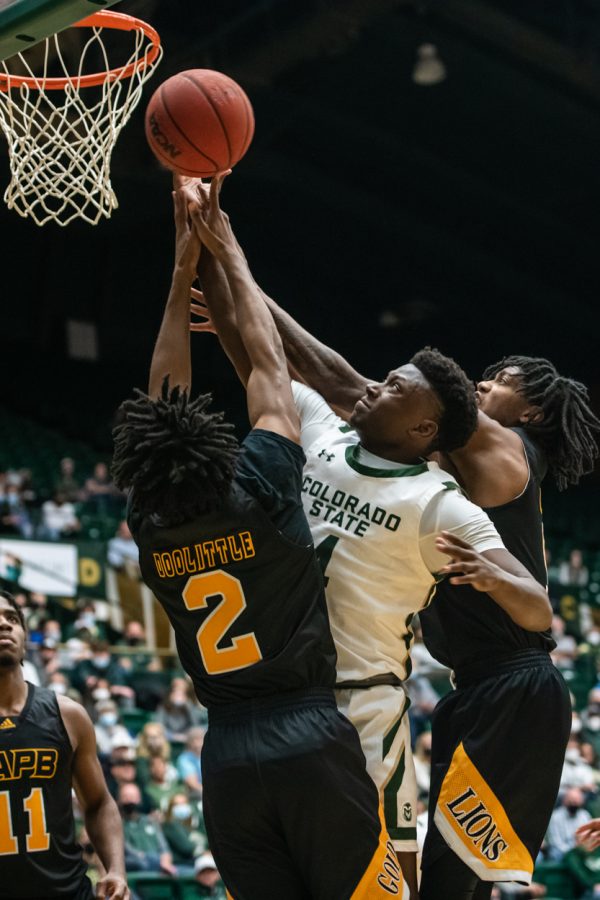 Junior Isaiah Stevens (4) goes up for a layup as University of Arkansas at Pine Bluff players attempt to block his shot Nov. 12. (Lucy Morantz | The Collegian)

The Colorado State University men’s basketball team has taken Moby Arena by storm. The Rams have dominated the court at full speed with no chance of slowing down as they step out ready to play on Dec. 1 against the University of Arkansas at Little Rock Trojans. Colorado State is looking to defend their undefeated season and bring another successful night to Moby Arena.

Although the Little Rock Trojans were 4-3 before the match, the Rams definitely had to size up against some strong competitors. One Trojan, in particular, is senior Nikola Maric, the 6’10’’ forward who is currently leading the team with 77 points, 24 free throws, 39 rebounds and 18 assists.

Meanwhile, at Moby Arena, the Rams started off strong as David Roddy snatched a steal for a full-court fast break, securing a layup and starting off the board in the first minute of the half. This set the pace for the first half as the Rams continued pushing neck to neck against the Trojans. The closest comparative points in the game were seen early on as Trojan Marko Lukic brought down a good dunk, setting the score 7-8.

With nearly 12 minutes left of the half, Isaiah Stevens and John Tonje were ready to set apart the lead as Stevens pushed down the court for a step-back 3-pointer securing the Rams five solid points, making it 11-7. Tonje wasn’t done there, as he added to the energy with an assist from Stevens for a driving layup, putting Colorado State at 13-7.

Not only were the Rams dominating offensively, but they had a strong defensive hold on the Trojans in staying on the scoreboard with seven points for about seven minutes. With the Trojans left pretty much empty-handed in the first half, it gave the Rams the opportunity to rack the scoreboard and really work the court.

As the first half dwindled, there were plenty of steals, rebounds, and quick opportunities Colorado State took. With only five seconds left, Stevens found himself at the free-throw line, sinking two good free throws and ending the half at 43-20.

.@droddy22 with a HUGE block that takes us to halftime at Moby!! 😤#TeamTogether @FortCollinsDCJH pic.twitter.com/IEvFrzNE94

As the second half momentum began on the court, Little Rock was ready to change the direction of the game starting the half with a layup from DeAntoni Gordon. This momentum was short-lived, as Colorado State secured three 3-pointers from Kendle Moore, Stevens and Adam Thistlewood, which only strengthened the lead to 54-22 in the first four minutes.

While the Rams racked the scoreboard and dominated the court, head coach Niko Medved got the opportunity to incorporate incoming players. Not only did this bring Colorado State a new mix but it gave our Rams the chance to show off their skills. Freshman guard Jalen Lake did just that as he secured a 3-pointer at the 14-minute mark, setting the Rams at 59-30.

As the clock was inching closer to the finish, Little Rock was ready to work Colorado State until the end. As fouls were being called, plays were being made, and the Trojans still found themselves trailing by nearly 30 points, giving Colorado State a sweet victory.

Categorical leaders for the Rams:

Colorado State finished off a successful night in Moby Arena with a final score of 86-55. After bringing home the win against the Little Rock Trojans, Colorado State Rams have now extended their 8-0 undefeated season — and they aren’t finished there.

The Rams will return to Moby Arena on Dec. 4 at 2 p.m. against Saint Mary’s College for their last home game this year, also celebrating our junior Rams with junior night — Nick Bassett, Tonje, Stevens, Dischon Thomas and Roddy. Then they will head to Fort Worth, Texas, for the Naismith Basketball Hall of Fame Classic against Mississippi State University on Dec. 11.